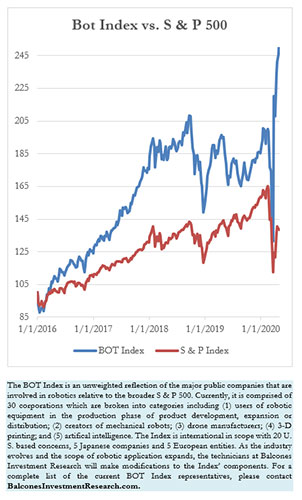 Investors must be feeling much like Dr. Dolittle’s fictional animal Pushmi-Pullyu. The two-faced llama that seemed to head nowhere, is somewhat reminiscent of the market forces that present significant upward moves one day only to be offset by an equally virulent downslide the following trading day. That having been said, again this week, the bots produced a positive performance of 3.40% while the broader market declined about 21 basis points. There were ten components that experienced 5% or greater returns within the Bot Index while there were only three that had a similar decline. Virtually all the companies noting significant moves were as a result of earnings seasonal reports.

Accuray Inc. led the gainers with a spectacular 24.32% increase. The low- priced stock gained after reporting a 3 cent increase in the third quarter versus a 1 cent loss in the comparable 2019 period. Two Asiane stocks followed Accuray into the double-digit zone, with Hiwin Technologies rising 21% and Fanuc up 11.29%. Rounding out the better performers for the week included: Yaskawa Electric (+8.42%), NIO Limited (+8.16%), iRobot (+7.78%), Cognex Corp. (+7.39%), AeroVironment (+6.38%), Faro Tech (+6%) and ABB Ltd. (+5.63%). NIO gained following indications that it had secured $1 billion in funding from several economic-development entities of the Chinese government. Faro’s quarter earnings loss of 2 cents compared with Wall Street consensus of a 72 cent loss. The earnings were the third in the past four quarters in which the report exceeded expectations. While iRobot experienced a quarterly loss of 64 cent, it was a bit better than the 67 cent loss that analysts had been predicting. Revenues for the company were lower than 2019 but still above expectations. Cognex Corp. joined the gainer group as its 12 cent earnings for the quarter compared favorably with the 8 cents that was expected by the Street. Finally, ABB Ltd. reported earnings which led Zachs Research to issue a new ‘buy’ recommendation on the stock. The secure 4.15% yield on the stock also makes it attractive to many investors facing low or non-existent yields of fixed income investments.

The effects of the coronavirus were particularly harmful to the weeks performance of the three major decliners: Amazon,  Ekso 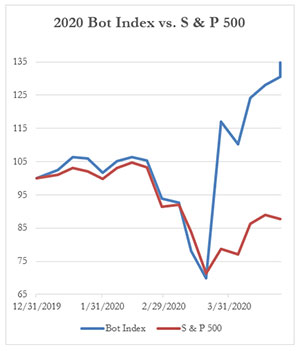 Bionics and Oceaneering International. Ekso reported a disastrous slide in both earnings and revenues as hospitals restricted elective surgeries and procedures which are required in much of Ekso’s product line. Likewise, the shares of Oceaneering International dropped 6.73% as investors anticipate a weak quarter when the company reports next Wednesday as oil prices suffered due to the pandemic. As for Amazon, analysts’ expectations for  the first quarter earnings of $6.25 were well above the reported $5.01. In addition, Jeff Bezos noted the company would be spending all its expected $4 billion in operating profit in the second quarter on coronavirus-related expenses. The stock fell over 5%.