"There is no force on earth more important than an idea whose time has come."  -Victor Hugo 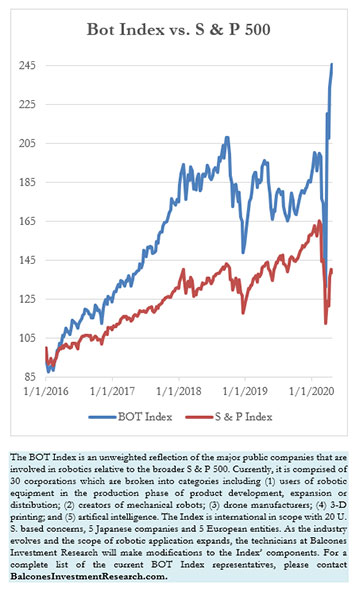 It was a large performance swing between the Bot Index and the S & P 500 this week, with the broad market dramatically trailing the robotic stocks. The bots gained 1.89% while the S & P 500 dropped 1.32%. Much of the strength in the Bot Index occurred in companies that have not faired too well of late. Oceaneering International rebounded 27.79% from the prior week’s 15% decline and low-priced Ekso Bionics jumped 16.33% while iRobot rose 10.13%. Those three companies provided the only double-digit gains during the week. The other issues with favorable numbers included OMRON Corp. (+7.56%), 3D Systems (+7.38%) and Faro Technologies (+5.89%).  There was really no news which would account for the more significant moves of either the highest or lowest performers for the week.

On the weaker front, NIO Corp. gave back 8.41% from the near 16% increase of the prior week. A similar situation occurred with the stock of Cyberdyne whose 5.17% drop followed its performance leading 16.22%.

More on Coronavirus and Robots:

In our April 4th edition of the Bot Brief we cited a number of past epidemics and the fact that many served as a ‘tipping point’ to adjust changes in societal habits or conditions. We made the analogy that the current focus on the coronavirus-19 may serve to promote the utilization of non-human activities in various parts of production as well as in healthcare. Robots have always served mankind well in dirty, demeaning or dangerous activities. With much of the world’s population sheltering in place, the wheels of the economy have ground to a halt. On the other hand, healthcare respondents have been pushed to the limits and have faced jeopardy from their exposure to the virus. It is obvious that the more extensive utilization of robots in the workforce would mitigate much of these twin maladies.

In news this week, Boston Dynamics’ canine-like robot is working as a telemedicine aid in a Boston hospital. The robot is serving to reduce exposure of healthcare workers by performing  stretching the staff or adding to their vulnerability. Similarly, Boston Scientific announced it is working with Medtronics, UnitedHealth Group and the University of Minnesota on the development of an alternative to conventional ventilators. The device blends a robotic mechanical ‘arm’ to force air into the lungs of certain coronavirus-19 sufferers. 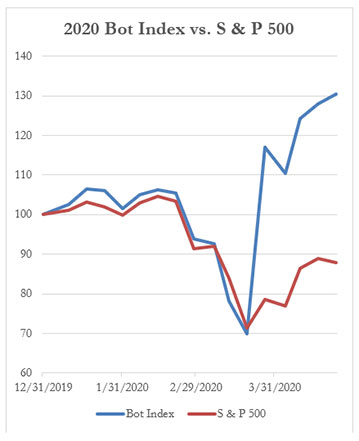 Tesla announced it has accumulated three billion miles of autonomous driving in a video release this week. In previous remarks, Elon Musk had indicated that when the company’s research and testing had obtained six billion miles of driverless roadwork, it would be ready for the implementation of fully autonomous vehicles. With the company accruing three million miles of experience per day, it won’t be long before the company is ready to proceed with Musk’s vision. It will, however, be dependent upon government approvals and customer acceptance.

Separately, researchers at the San Francisco Federal Reserve Bank and the Queen’s College at Cambridge University UK requested information regarding the Bot Index this past week.

What is an End Effector and How Do You Use One?