There is no force on earth more powerful than an idea whose time has come. - Victor  Hugo 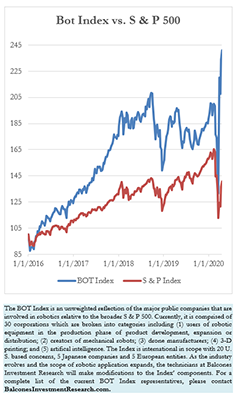 Global markets were buoyed by the optimism surrounding Gilead Science’s announcement of the effectiveness of coronavirus treatment results from its Remdesivir drug. The drug, designed in 2009 for the treatment of hepatitis, showed remarkable success in clinical trials at the University of Chicago and may have created support to end the shelter-in-place that has had such a negative impact upon the economy. The markets responded swiftly, with the broad market up 3% while the Bot Index increased 3.13%. 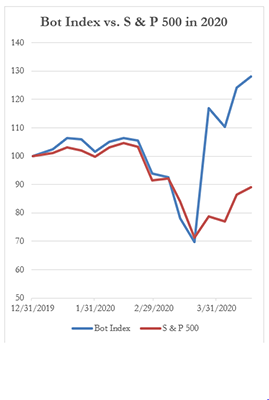 Six of the components within the thirty stock Bot Index gained by double digits, half of those were from Asian companies. The low priced Ekso Bionics led the Index with its 23.38% increase, as the NASDAQ accepted the results of the company’s reverse split and retained its listing. The Asian companies were led by Cyberdyne (+16.22%), NIO Corp. (+15.88%) and Yaskawa Electric (+11.10%). NIO Corp’s gain follows its 15.41% increase in the prior week. The stock has been responding to March delivery orders which were up 117% month-over-month. The trend in not likely, as the quarter’s 3,838 vehicle placements are less than half the deliveries of the 4th quarter of 2019. Amazon gained 16.26% while NVIDIA Corp. jumped 11.17%. Shareholders of NVIDIA were pleased following the Chinese government’s approval of its $26.9 billion takeover of Mellange Corp. 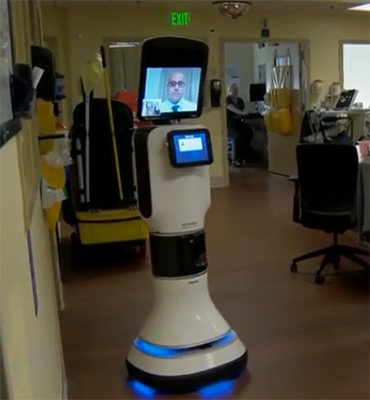 Our hometown hospital, Orlando Health has been utilizing robots more extensively during this coronavirus epidemic. The robots are fully mobile and carry stethoscopes and a live video feed between the patient and the doctor. The byproduct of this part of telemedicine is that doctors’ capabilities can be more efficiently utilized, it keeps the doctors safer from contagion and does not require the extensive Personal Protective Equipment currently being required of healthcare workers. So effective has the utilization of robots become that an executive at the hospital classified this period as “The Golden Age of Telemedicine”.