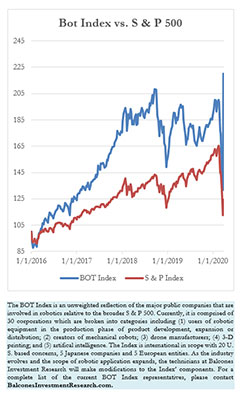 In a twist of mathematics and the construct of the indexes of both the Bot Index and the S & P 500, the bots enjoyed an extraordinary recovery in the past week. Since each of the 30 components of the Bot Index carry an equal weighting, the Index was skewed by two of its holdings that experienced extraordinary bounces. Consequently, the Bot Index hit a new high of 220.28, a 67.41 percent improvement. That exceeded the weekly results of the S & P 500 by 57%. The foremost of those contributing to the Bot’s performance was Ekso Bionics, that jumped 1,645% from its former trading price of $.22 to $3.84. The stock was propelled by management’s decision to remain on the NASDAQ listing by creating a 1 for 15 reverse stock split on March 24th. That prompted the research firm Cantor Fitzgerald to reaffirm its ‘buy’ recommendation and suggest an $8.00 target price. With the shares trading at $.22, the move to Friday’s close of $3.84 represented a 1,645% improvement over the prior week. Joining EKSO were shares of Oceaneering International that gained 32.28%. The stock had been driven down due to oil prices from a high of $15.96 on January 10th to last Friday’s $2.89. Whether this represents a ‘dead cat’ bounce or simply an over-sold position in the oil patch, remains to be seen.

For the first ever week in the Bot Index’s history since the end of 2015, there were no components that were in negative territory for the week. Indeed, there were seven companies that had near or exceeding returns of 20%. They include: 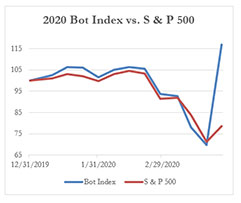 The passage of the $2+ trillion Care Act to help stabilize the economy this week certainly impacted the markets but it remains to be seen if the economy will be ‘rescued’. In the ‘economic world’, time and time again it is the advent of technological advances and not governmental ‘processes’ that overcome obstacles such as the one we are now facing. The Care Act certainly has adequate funding to augment the technology to expand testing and scientific breakthroughs regarding the ultimate cure and inoculations. Governments’ across the globe are focused, however, on the ‘process’ which will only serve as a stopgap until technology provides the ultimate answers.

In the American Economic Journal’s Feb 2020 Economic Policy there is an apropos article entitled, “Market Shocks Affect the Real Economy? Quasi-experimental Evidence from the Great Recession and ‘Normal’ Economic Times” by academicians from University of Chicago, Princeton and UC Berkeley. The premise of the tome is the ‘finding’ that “small business lending is an unimportant determinant of small business and overall economic activity.”

Using data derived from the Great Recession the authors noted the occurrence of three issues that run contrary to conventional wisdom. First, is that small firms operating in concert with unhealthy banks experienced substantial declines in loan originations. Secondly, they found that negative lending shocks was economically insignificant. And finally, “measures of employment with respect to small business loan originations are both qualitatively zero, economically and statistically.”

While this supposition provides some solace in the current environment, not unlike the Great Recession, the ‘processes’ that governments adopt may very well skew the revelations determined by this historical ‘look’ of the authors.

How Technology Will Affect the Design and Use of Implants