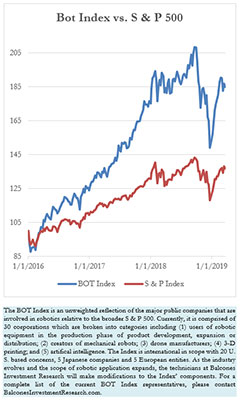 Despite the devastating 2.50% decline in the NASDAQ and the 1.90% fall in the S & P 500 in Friday’s trading, several of the Bot Index’s stocks managed positive returns for the week. On Friday, none of the domestic bot holdings were in positive territory and the only three gainers of the day were recorded by Japanese companies. Trading earlier in the week, however, helped to sustain the gains from NVIDIA Corp. (up 4.53%), Accuray Inc. (up 5.61%), Google (plus 1.78%) and Amazon who increased 3.06%. Other superior gains were recorded by international companies, led by the 3.87% increase of Keyence. Yaskawa Electric added 3.36%, Hiwin Technologies rose 2.26% and Fanuc Corp. increased 2.19%.

The gainers within the Bot Index were led by trading in Accuray Inc. The company was mentioned in a Zachs’ report, “Robotics Shaping Up MedTech”. The article contrasted the difference between the market opportunities of Intuitive Surgical (which Zachs carries a ‘sell’ ranking) and Accuray whom Zachs noted the CyberKnife is “much in demand”. Following the 2018 suspension of the medical device tax in the U.S., research and development of technological based solutions in the medical field has exploded.

Rockwell Automation fell 5.24% during the week, however, market fortunes may shine brighter in the coming week. Kiplinger issued a report on Friday entitled “6 Top Stocks to Buy for the Future of Industrial Automation” which featured Rockwell and ABB Ltd. (another Bot Index component). About Rockwell, Kiplinger stressed the strong dividend growth rate of 67% over the past five years together with 11% earnings growth expectation for 2019 and 8% for 2020. As for ABB Ltd. the article stressed the company’s attractive valuation, improving growth prospects and a dividend yield that is twice that of the Standard and Poors 500.

Fly Me to the Moon:

Last month, NASA announced its plans to return to the moon for good. NASA administrator Jim Bridenstine stated, “This time when we go to the moon, we go to stay”, noting their plans to use the moon as a staging area with which to further explore regions of outer space. With a deadline of 2024, NASA hopes to have a lunar presence that will have landers, space tugs and refueling stations. Of most significance to the Bot Brief and the robotic industry, NASA is seeking relationships with commercial ventures to satisfy the specific needs of its outer space effort. The Bot Brief has long been a proponent of the use of robotics in both under sea and outer space exploration and development. Much has been written about the negative impact that robotics might play in employment substitution, however we have viewed the overwhelming opportunities that space and sea mining present for future employment.

NASA is on a fast track to achieve its presence on the moon. The first round of contracts are expected by March 25th, with awards amounting to $9 million to come as early as May. Specifically mentioned was Bot Index’s component Northrup Grumman as an example of current flights to the space station. The effort will take place in three phases. The first phase is to launch a Gateway lunar orbital module from which unmanned tests of surface landings will occur. This phase is expected in early 2024. The second segment, in 2026, will involve human astronauts docking with Gateway to pursue further lunar landing tests. The final stage will place four astronauts on the moon.

With Mr. Bridenstine’s comment, "So, we're not going back to the moon to leave flags and footprints and then not go back for another 50 years. We're going to go sustainably to stay, with landers and robots and rovers — and humans." If all performs to plan, Mr. Bridenstine announced, "We're going to take as much of this as possible and replicate it at Mars,"

Certainly, the role of robotics and added employment opportunities will be enhanced in this new seminal initiative that will present profound consequences for the future of mankind.