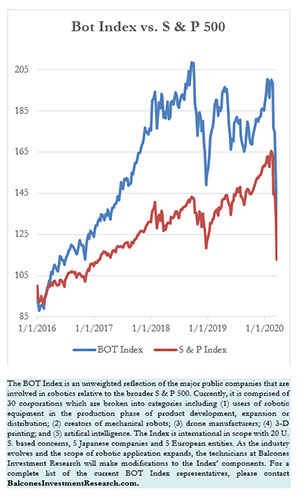 "There is no force on earth more powerful than an idea whose time has come,"  -Victor Hugo

The destruction of the stock market has continued to erode wealth in the nation and the world. Fears of the coronavirus’ impact on the economy are becoming evident. Statistics on retail sales and employment, which had been among the stellar performers of the pre-virus economy, are among the hardest hit. This week noted double digit declines in both the bots and the broader market. Contrary to logical assumptions, the higher beta Bot Index fell 10.59%, considerably better than the near 15% decline of the S & P 500.

The four winners in the Bot Index were overwhelmed by the fifteen members that experienced double digit declines. Of those fifteen six fell over 20%. Two of the gainers were from Japanese companies – OMRON Corp. and Cyberdyne who gained 2.91% and 1.84% respectively. OMRON announced it was investing $10 million in a California plant to design, develop and manufacture robots and automation advances. Not surprisingly, the on-line retailer Amazon rose 3.42% and the big winner was AeroVironment who increased 6%. AeroVironment was noted in a couple of Zach’s reports as exceeding expectations in the past four quarterly reports. 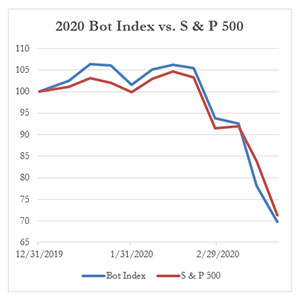 This Company May Aid in The Fight Against Coronavirus:

As noted in the market review, Amazon was one of the few gainers this week. Part of the reason was their on-line marketing and delivery system that supersedes traditional retail shopping. With consumers unable to enjoy their traditional shopping, on-line purchases and autonomous delivery systems have become vitally important. A California startup company Nuro has developed a relationship with the Kroger grocer company for the delivery of perishable products direct to consumers in a test market near our headquarters in Houston. The West University section of Houston has been subject to testing of Prius delivery of Kroger groceries for some period. However, the company just announced, “ Nuro, the leading robotic company that launched the world's first unmanned delivery service, debuts R2: its second-generation, custom-built vehicle, which today was granted the first ever exemption for an autonomous vehicle by the U.S. Department of Transportation’s National Highway Traffic Safety Administration (NHTSA).

The new R2 autonomous delivery vehicle has no windshield, is not designed to provide for human riders and has climate-controlled bays for the freshest delivery of consumables.

The company was started by a couple of Google autonomous vehicle engineers and has the backing of $942 million of PE capital, some of which was from Softbank.

This company seems to be in the right place at the right time and we can only hope that, at some future point, it will become public and we can participate in its explosive potential. 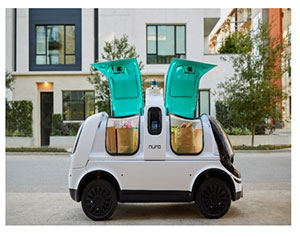