"There is no force on earth more powerful than an idea whose time has come."   Victor Hugo 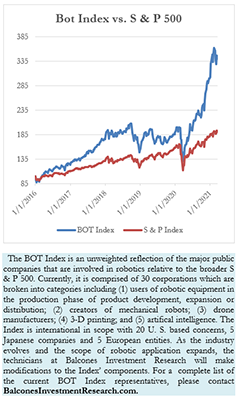 Both the broad market and the robotic-related stocks fell in trading last week. Despite the massive stimulus package and assurances from FRB Chairman Powell that rates will be maintained indefinitely at near zero, the S & P 500 declined .77% last week. That number bested the Bot Index’s 1.78% fall as 2/3rds of its components noted declines from the prior week.

The major damage to the Bot Index came from Oceaneering International who fell 10.81% and Immersion Corp. that declined 9.38%. Both are low priced, and each had experienced double digit expansions in the prior two weeks.

Other major weakness was noted by 3D Systems (-7.64%), Faro Technologies Corp. (-6.43%) and certainly by the twin EV components – NIO Ltd. (-4.73%) and Tesla (-5.61). The two electric vehicle companies have been on a recent roller coaster ride having experienced huge upside moves last year and in the first quarter but are now starting to lose investor appeal. It will be interesting to note if the rising interest in hydrogen powered vehicles will come to fruition as a ‘clean’ alternative competitor. Or as noted in the March 21, 2021 edition of the IEEE Spectrum, will ammonia fuel move to the forefront of clean energy. The article noted that the fuel, “emits no carbon dioxide when burned. It’s abundant and common, and it can be made using renewable electricity, water and air. Both fuel cells and internal combustion engines can use it. Unlike hydrogen, it doesn’t need to be stored in high pressure tanks or cryogenic dewars. And it has 10 times the energy density of a lithium-ion battery.” 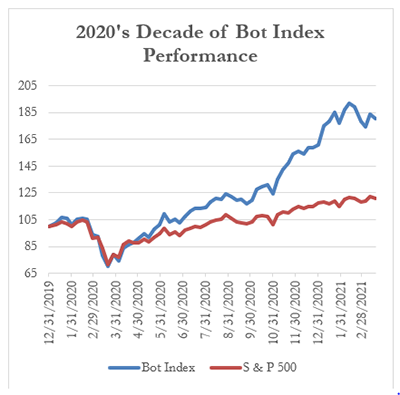 While dancing may, at this time, be out of the question, more breakthroughs are being made in assisting spinal injury disabilities to be overcome. In an article in Neoscope, one of the original components of the Bot Index was featured as providing assistance for an injured Australian soccer player. The soccer player who now has quadriplegia after an injury on the field is walking again thanks to a robotic exoskeleton that’s helping with his rehabilitation.

Australian Football League player Shaun Greentree collided with another player and fractured three of his vertebrae in October, leaving him paralyzed and unable to walk. Now, he’s one of the first people in the country to use the exoskeleton as he learns to get back on his feet.

“I found that it’s sped up the process of me being able to regain walking function,” cited Greentree.

“The system, an EksoNR device built by Ekso Bionics, is designed to help regulate the wearer’s gait and improve their balance. While its powered robotic components can help make it easier to move one’s legs, its various settings can help physical therapists train patients to gradually support themselves, providing support and balance while they walk around of their own volition.”

Ekso Bionics was removed from the Bot Index back in May of 2020 when its stock price had been subject to a 1:15 reverse split to bring it up to $2.91. The current price of $7.09 may reflect the opportunities noted in the following quote:

“Aside from spinal cord injuries, the robotic system can also help people recover from a stroke or manage symptoms from neurological conditions like Parkinson’s disease. As such, Royal Rehab (the Australian healthcare facility working with Mr. Greentree) has big plans to adopt the technology into their usual treatment regimens as they get more exoskeletons shipped over from Ekso Bionics.”