"There is no force on earth more powerful than an idea whose time has come."        VIctor Hugo 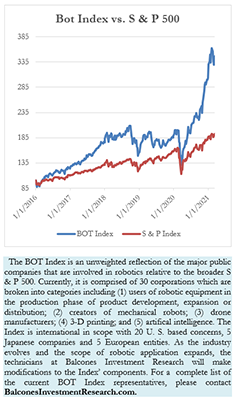 In a reversal of fortunes, the weakest performers within the Bot Index two weeks ago were among the largest gainers in this past week. Prompted by the trillion plus dollar fiscal stimulus package to combat the covid-19 virus, the U.S. stock market gained 2.64%. The Bot Index, which was plummeted two weeks ago, rebounded with a 5.41% jump. While the broader market experienced a new record, the bots’ movement to the 346.69 level, while significant, was insufficient to match its all-time record of 362.09 achieved on February 11th.

Leading the gainers were five components who experienced double digit gains. Although it did not fully recover from the 31% plunge of the prior week, the best performer of the bots was the near 26% jump by 3D Systems.

The twin electric vehicle stocks, Tesla and NIO Ltd., rebounded 16.11% and 19.30% respectively. Somewhat of bellwethers for the automotive future, the stocks tend to experience rather radical moves either direction based upon the trend of the NASDAQ.

AeroVironment rose 15.40% following the announcement of its third quarter earnings. The Street was looking for a flat quarter, so the surprise $.14 EPS improved the outlook for future growth of the company within the defense category. The EPS compared with the company’s one cent loss last year while the Y-O-Y revenue gain was 27%. The company reported that it had recently attained a $6 million contract for its Puma drone system from a European nation and to further promote the company’s stock, Investopedia listed AeroVironment as one of 3 ‘Defense Stocks With the Most Momentum.

The decliners were confined to a couple of the Japanese companies - Keyence Corp. (-2.07%) and Cyberdyne (-1.05%). The Google slide of 2.16% reflected some political and corporate issues regarding the mega-cap high tech industry. 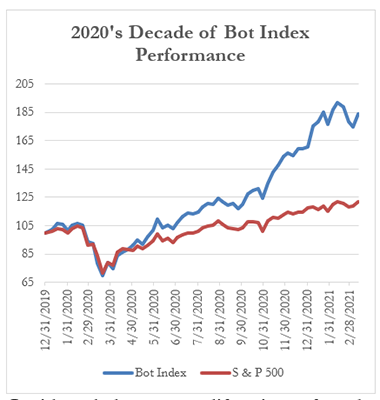 Covid-19 led to a proliferation of cash-transfer schemes. Could it pave the way for a universal basic income?

In the March 6th edition of the Economist, the above title was the byline of a feature extolling the virtues of a universal basic income. The article noted the relative success that a stimulus version of UBI which many countries enacted to combat the negative social and economic impact of the pandemic. The article cited recent polling of young people in the U.S. and Europe that indicate support for a UBI. Several studies and experiments on cash giveaways were noted and “worries about inequity and the belief – especially among tech types – that robots and artificial intelligence might soon make many workers redundant led to renewed interest in basic incomes in the 2010’s,” was included. The article even included a discussion regarding Thomas Paine’s concept of ‘ground rent’ and ‘natural inheritance’ in the argument to accept a universal distribution of the wealth of the world as plausible. While Mr. Paine was, indeed, a great orator and contributor to the freedom of the U.S. during the Revolutionary War, he was not an economist. If the authors had dug a bit deeper into Paine’s philosophies, they might have noted other of his comments that would uncover one of the primary reasons against UBI. In 1776 Paine wrote, “What we obtain too easily, we esteem too lightly, tis dearness alone that gives everything its value”. Certainly, Paine was anticipating the cost in human lives from the impending conflict with England, it does, however, also apply to the argument against easy money.

The Economist article also failed to fully address how extensive distributions would be financed. They did express their concept that, “new enthusiasm for cash transfers owes more to a broad-based relaxation in concern about government borrowing”. That having been said, we all know that the cheapening of currency has significant and lasting negative consequences. Inflation, social deterioration, sense of self-worth, and initiative destruction are likely implications of free money giveaways.

If, years down the road, there is a need to supplant the lost labor incomes due to the Robotic Revolution (and the Bot Brief does not anticipate that necessity), perhaps the example of Alaska’s transfer of oil wealth could serve as a plausible alternative. There a pool of wealth creation (due to natural resources exploitation) is the source of their universal distribution. Perhaps, the wealth of corporate exploitation of robotic production could serve as a pool from which resources be a funding source. However, that opportunity already exists from the stocks of those companies that are the beneficiaries of robotic creation and application! Capitalism works!

How Robotics Training Can Overcome the Workforce Shortage