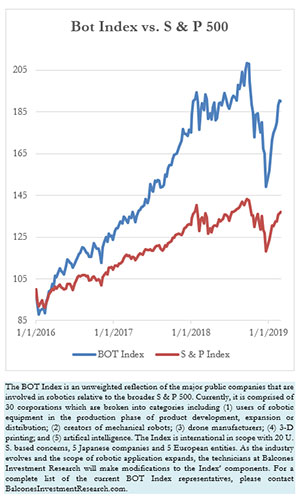 Earnings gains or earnings misses seemed to be the theme for the Bot Index’ performance for the final week of February. The bots lost 14 basis points as compared to the 34 basis points which the S & P 500 experienced to the positive. The best performance recorded within the bots this week was achieved by the Chinese electric car company NIO Inc. February was a good month for many Chinese companies and NIO’s stock was also significantly enhanced by a 60 Minutes TV feature. In a spectacular interview NIO Chairman William Li reflected on the “lifestyle” approach the car company is conducting to enhance the owners’ sense of belonging to a cutting-edge technological ‘family’. Evidently, the concept appealed to investors as they bid up the stock 23.13%.

Revenues that rose 34% and 54% respectively in the fourth quarter and full year for Ekso Bionics helped propel the stock 10% during the week. For the year to date, the stock has gained 76.33%.

IRobot was the third best performer for the Index as it increased 7.52% in value. The stock was promoted during the week by a couple of articles that placed the company’s prospects in a favorable light. The first article was published by Simply Wall Street with the title, “At US$124, is it Time to Put IRobot Corporation on Your Watch List?”. Investors were prompted by the quote within the feature, “earnings over the next few years are expected to increase by 30%, indicating a highly optimistic future ahead.” The second commentary was issued by The Motley Fool which was entitled, “3 Growth Stocks for In-The-Know Investors.”

Of the weaker names within the Bot Index’, the most anemic was Cyberdyne Inc. whose stock declined almost 18%. With the exception of NIO’s strength, there was general weakness in many of the Asian components of the Index. In the prior week the Japanese stocks performed well and Cyberdyne, in particular, gained over 5%. Perhaps this week’s stumble was some reversion to the mean for the company.

The fortunes of Immersion Corp. and 3D Systems were impacted by poor earnings reports. Immersion fell 9.37% and DDD declined 12.28%. Immersion reported a 4th quarter loss of 10 cents per share and analysts expect losses to continue in the coming quarter. 3D Systems’ loss was 4 cents per share, leading Bank of America to issue a report, “3D Systems Could Remain Under Margin Pressure.” The BofA analyst continues to rate the company as ‘underperform’ and has a $10 target on the shares that are currently trading at $12.14.

In a follow-up to our article on the lunar probe launched by SpaceX, this week we witnessed another SpaceX venture into outer space. The SpaceX Crew Dragon was carried on a Falcon 9 test flight to the space station. As a part of NASA’s Commercial Crew Program to launch manned space flights from the U.S., the SpaceX test could have major implications on the future for astronaut ventures in the future. With the success of the launch, docking and initial stage recovery, U.S. astronauts could be back in space by this July.

The publication Hacker Noon issued an article this week “Are People Losing Control Over Robots?”. The central premise of the feature was the leap from human programming of robots to machine learning where the robot itself builds algorithms for decision-making, continually building from past experiences. The expressed fear presented by the article is the unknown course that a robot might make to preserve its own survival over that of mankind.

FedEx joined the ranks of delivery entities that are exploring the use of autonomous delivery robots. In focusing on ‘the last mile’ the prototype FedEx bots use LADAR sensors and can travel on battery power at 10 miles per hour. The company expects the robots to become a standard part of its same day delivery mantra. The Tonight Show featured the devices in one of its recent segments.

Finally, the Atlantic League will be using a robotic format for calling balls and strikes for the next three seasons. At the request of MLB, the League will be the beta test for future use of robo umpires at their games (and what they are paying Bryce Harper, MLB is going to need more fan participation!).