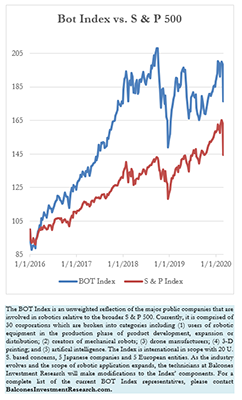 "There is no force on earth more powerful than an idea whose time has come." - Victor Hugo

In one of the worst trading weeks in U.S. history, the S & P 500 slid 11.50% based upon the growing threat of the coronavirus and its likely impact upon the world economy. The Bot Index was similarly impaired, however, interestingly it was the foreign components that allowed the bots to actually outperform the broader domestic market. In fact, the only gainer of the 30-stock index was the Chinese electric automaker NIO Corp. which jumped 1.23% in the week. NIO negotiated a government cash infusion and shares traded 15.8 million shares in premarket activity on Tuesday.

A raft of Japanese companies lost less than 8.70% (Yaskawa Electric, Fanuc Corp., Keyence and Cyberdyne) and the Dutch firm Qiagen NV lost only 3.9% based upon its work on a coronavirus diagnostic test. Management expects adjustments and alternative options associated with its QIAsymphony which might be  altered to create a new diagnosis for the coronavirus. This new diagnostic is expected to offset the  slowing of Qiagen’s tuberculosis test QuantiFERON and present a new source of financial growth for the firm.
There were nine components of the Bot Index that lost around 12% for the week. As might be expected, all were among the higher price-to-earnings companies in the Index. They included Teledyne, Immersion Corp., Intuitive Surgical, Rockwell Automation, Apple, Cognex Corp., Textron, United Technologies and Lockheed Martin. The worst performer for the week was 3D Systems, which gave up almost one-quarter of its value. Investors were disappointed by the company’s earnings report which noted a decline of $15 million in year-over-year revenues and EPS that were half of the prior year’s comparable quarter.

Other companies whose stocks dropped significantly during the week included: Ekso Bionics (-21.05%) who quarterly revenues were 13% above year-over-year figures but still incurred a net loss of 4 cents per share; AeroVironment fell 19.74% upon an article penned by Zachs entitled “AeroVironment’s 3Q Earnings Expected to Decline”; and Oceaneering International whose 18.74% drop was attributed to the decline in oil prices.

The Economist Magazine carried a couple of robotic related articles in its most recent publication. The first, echos a theme that the Bot Brief has long felt was one of the more positive aspects of the Robotic Revolution – the conquest of space. In an article entitled, “Beneath the Surface” the author noted two instances of unmanned exploration of the dark side of the moon by China and on Mars by the United States. Both explorations seem to be centered on understanding the geology of under the surface strata. With the Mars lander, the objective was to determine how, without the presence of tectonic plates , there can be so much marsquake (it seemed silly to call it ‘earthquake’) activity. The mission is finding surprises of super magnetic forces in deeply buried metals. The Chinese effort is using radar to determine the extent of millions of years of meteor impacts on the moon’s surface and how the deeper subsurface is constructed.

The second article focused on research that is being conducted on protecting delivery drones. As the coronavirus spreads and there is a growing need for robotic transportation, there is a fear that delivery drones might be subject to piracy or other ballistic activity that could impair their function. A group of scientists have developed what they refer to as DopplerDodge drone defense system to allow a drone to perceive a threat and react within the time necessary to undertake evasive actions. The system is in test phase, however, the results appear promising in this next step toward the expanded utilization of drones in everyday life. 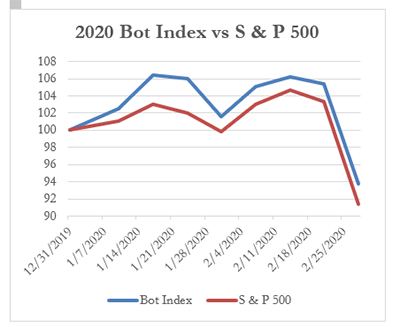 How to get to a position MiR AMR