"There is no force o 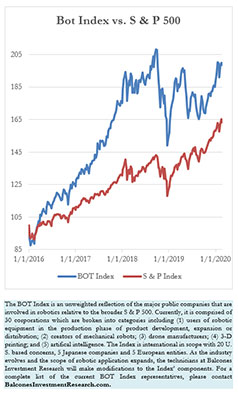 n earth more powerful than an idea whose time has come"

Poor economic news and the ongoing impact of the coronavirus cast a pall over Friday’s trading, driving an already weakened market further into the red. The S & P 500 slid 1.25% while the Bot Index gave up only .79% for the week. Surprisingly, Faro Technologies paced the bots when it soared 12.87% on massive volume. The earnings call on February 20th  was well received by investors despite the appearance of a relatively soft market for Faro products. The management, however, offered up a new strategic focus that prompted trading volume of 491k shares versus the 84k the prior day.

Joining Faro was strong performance (+8.22%) by NIO Corp. following a positive article by InvestorPlace entitled, “NIO Stock is a Coiled Spring”. Coiled or not subsequent tweets by investors offered a significantly different appraisal of the Chinese electric car maker. Rockwell Automation rose 4.33% after management announced that the company was completing the acquisition of  a public Italian firm and a private concern that will strengthen the company’s industrial automation business. Finally, NVIDIA Corp. added another 1.47% to the 15+ gain of the prior week. The positive earnings report led to a favorable stock report from the Wall Street research firm Bernstein. The stock has been on a three-week run that has increased its value by 24%.

Not surprisingly, many of the Japanese stocks showed weakness for the period. Yaskawa Electric dropped 6.61%, Fanuc Corp. fell 4% and OMRON Corp. and Keyence declined 3.4% and 2.28% respectively. However, it was Cognex Corp. that represented the most weakness within the Bot Index. The stock fell 6.16% as, despite announcing fourth quarter earnings gain of 77% year-over-year. Investors were wary of the company’s revenue flow which decreased 12% over the comparable quarter. iRobot fell 4.15% as a litigating firm began fishing shareholder, implying misleading reports from management regarding inflated sales figures. Finally, Lincoln Electric slid 4.79% following an 11% earnings decline and a 1% reduction in year-over-year statistics. 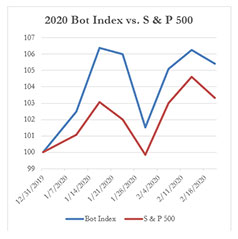