" There is no force on earth more poweful than an idea whose time has come."  -- Victor Hugo 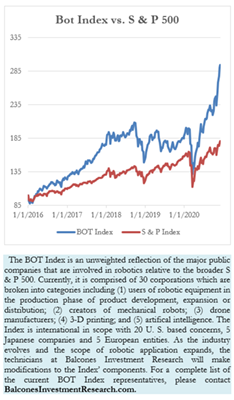 For the first time since September 25th, the Bot Index fell secondary to the broader S & P 500. Both indexes turned in very respectable performances for the week. The bots jumped 1.47% while the S & P 500 gained 1.67%. The Bot Index was dragged down by a huge decline in NIO Ltd. and relatively weak performances by the Japanese components of Keyence Corp., OMRON Corp., and Yaskawa Electric.

Rockwell Automation and Immersion Corp. were among the decliners within the Index during the week. Rockwell Automation slid 3.11% due to a downgrade by Barclays Bank to “Equal Weight” from “Overweight”. Shares of Immersion Corp. fell 5.16% despite a Zacks article entitled, “Immersion Shares March Higher, Can It Continue?”. Truly, the stock has been on a recent upswing, gaining 26% just this quarter-to-date before this week’s ‘give-back’.

There was no real news directly regarding NIO Ltd. in the market that would account for its 20.50% decline other than a drop by peer Kandi Technologies who was subject to short selling. Typically, NIO trades in sympathy with Tesla, however, the American EV maker gained over 2 and a quarter percentage points.

Of the gainers, 3D Systems and Oceaneering International were the two components of the Index that produced double digit gains for the week. 3D Systems jumped 21.91% following an injection of $65 million in capital from the sale of two subsidiaries and its 3rd quarter earnings beat. The stock has soared 61% during November and Balcones Investment Research will be surprised if the surge can continue….unless there is a potential suitor that feels the printer could complement its defense product line.

Oceaneering International rose 13.24% as Wall Street analysts continue to revise earnings and revenue forecasts upward. The hopes that a coronavirus vaccine could revive the economy would have the most leveraged impact upon the price of oil. That would feature into an explanation for the recent jumps in the stock that has more than doubled the value of the shares since the end of the third quarter.

Intuitive Surgical rose almost 7% following a Motley Fool article entitled, “3 Stocks That Could Make You Rich!” that featured the company. 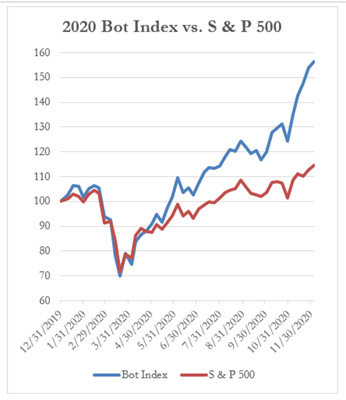 What’s Going on in Bot-world?

Elon Musk now has a driver’s license for the State of Texas and there have been strong indications that he will move headquarters to the Lone Star State. Some of the various companies that make up the Musk empire have already made the move out of the high tax arena, but the shift of the Tesla crown gem would be a blow to California.

Big Brother has taken another big step in the invasion of privacy in China. The Chinese Communist Party is creating a new ‘smart city’ entitled Cloud Valley that would be run by Artificial Intelligence with sensor designed to be interactive with live citizenry personal data. Wi-Fi data, consumer preferences, weather data, dietary issues and even what is your favorite cocktail.

Researchers at MIT have coined a new phrase – Robogrammar, to assist in the design of robots that are set to perform specific tasks. While AI has been of concern that it could infiltrate all human capacities, the Robogrammar is set to prompt very specific design needs for robots to run various contained tasks. While the researchers argue that the use of AI will be used in conjunction with roboticists who do the actual final design, it seems only a matter of time before that area will be prone to another AI takeover.