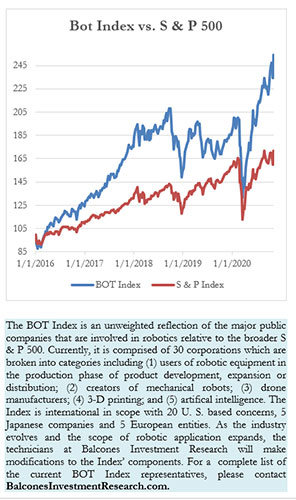 There were seven of the Bot Index’s components that gave investors greater than a double-digit return for the week. NIO Ltd. led the gainers again as it announced a new battery system that will generate 100 kw which will be a part of the company’s ‘battery swapping system that will allow buyers to up upgrade for newer, more powerful and longer lasting batteries without having to liquidate automobiles. The company announced it had placed 5,055 vehicles in October, a jump of over 100% in year over year deliveries.

NIO Ltd.’s rival Tesla joined NIO as one of the double-digit gainers with a 10.80% return following Musk’s $250 per bottle offering of its private label beverage.

Immersion Corp. rose 17.37% following a change in leadership and a report of 3rd quarter earnings of $.11 versus a loss of four cents in the comparable quarter in 2019.

Intuitive Surgical rose 10% following Motley Fool’s article entitled, “3 Stocks to Buy and Hold for Decades.” The article hinted that the stock could triple in value by 2030.

There were only two negative stocks during the week’s trading. The Japanese company Cyberdyne Inc. fell 72 basis points and Accuray Inc. dropped 9 basis points even thought it reported a generally favorable earnings report. 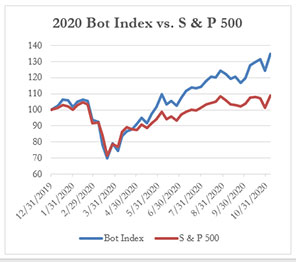