"There is no force on earth more powerful than an idea whose time has come."   - Victor Hugo 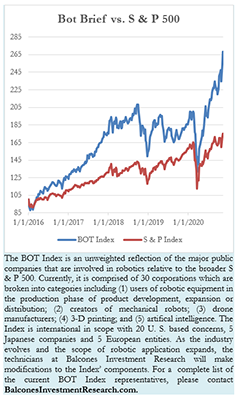 There were eight of the Bot Index’s thirty components that generated double-digit gains for the week. The best performance, at 32.87%, was the low priced ‘cyber-knife’ company Accuray Inc. The company’s first quarter earnings, at breakeven, compared with a Wall Street consensus of a nine-cent loss and a year-over-year comparison of an eleven-cent loss. Also, the company unveiled a new radiation treatment procedure at the American Society for Radiation Oncology’s annual meeting.

Another lower priced performer for the week was Oceaneering International with a 25.35% jump. The volume of trading last Monday was well more than double the standard and following its recent earnings report investors were heartened by guidance for both the fourth quarter and 2021. Based on Oceaneering’s ability to improve its cost structure, it intends to generate positive free cash flow this year and the next. Oceaneering also expects 2021 EBITDA to be in line with 2020's estimated range of $165-$175 million.

Brooks Automation gained nearly 20% following its reported earnings per share increase of  95.83% over the past year. The gain, to $0.47, significantly beat Street estimates of $0.36. Notably, revenues jumped 22% over the comparable period 2019.

Other major contributors to the outperformance of the Bot Index included:

3D Systems whose earnings gain prompted William Blair & Co. to upgrade the stock. The company also announced it had produced the world’s largest metal powder 3D printer for use by the U.S. Army.

Raytheon Technologies who noted both the termination of class action lawsuits and its acquisition of privately held Blue Canyon Technologies, a leading provider of small satellites and spacecraft systems components. The stock improved by 13%.

Teledyne Inc. jumped 12.61% after receiving a NASA contract worth $85 million.

Textron rose 12% following better than expected earnings as well as a curious situation at mid-week. The Street was abuzz with an unspecified offer to acquire all the stock of the company by rival Xcalibur Aerospace. Textron’s management indicated their skepticism over the validity of the offer, noting that that company has made similar overturns in the past that did not come to fruition.

The notable decliners for the week were all stocks that have been excellent performers in recent weeks and were subject to some profit taking. They included: 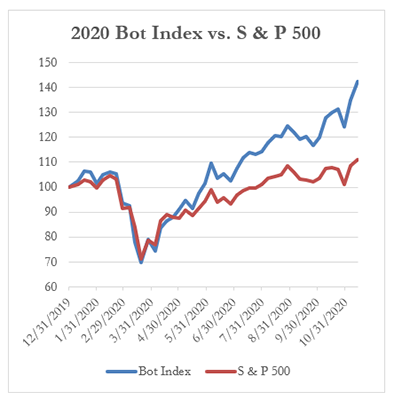 The IEEE Spectrum Magazine featured two articles of note in its November edition. In ‘Fractional Particles Could Mean New Electronics’ the authors noted the presence of ‘quasiparticle’ that have been created through electronic circuits in low temperatures and high magnetic fields. These new quantum particles may lead to new forms of quantum computers.

The second commentary focused on a newer AI form of autism detection that could, if FDA approves, could reduce the recognition of autistic symptoms from a current average of 4.3 years to under 3 years. The company who designed the diagnostic feature – Cognoa – stressed the importance of early detection since ‘numerous studies show that early intervention, before the syndrome if fully manifest, can reduce the severity of ASD and improve a child’s brain and behavioral development.’

OCTOPUZ to exhibit at Aerospace & Defense trade show in California