"There is no force on earth more powerful than an idea whose time has come."          Victor Hugo 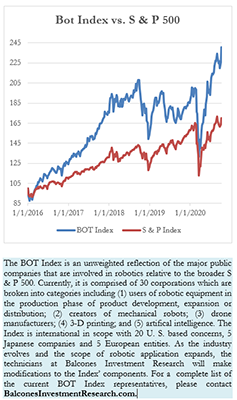 And the beat goes on! Once again, the Bot Index bested the S & P 500, this week on a scale of 6.47% versus 3.84%. However, let us remind our readers that the objective of the Bot Index is NOT to outperform the broader markets, it is simply to measure how well the industry is performing relative to an established medium. The acceptance, by investors, is a relevant measure of how the robotic world is becoming accepted as an economic contributor. Later in this Brief, we note that the cover article from the September 9th edition of National Geographic Magazine is devoted to how pervasive robots are becoming in the workforce and in consumer life.

The trading week for robotic stocks propelled the Index to an all-time high level. It is noteworthy that every domestic component turned in a positive performance for the week and only three Asian companies experienced downturns, none of which were consequential. There were six bot components that experienced double digit returns.

With a 37.37% jump during the week, 3D Systems led the Index following speculation that Tesla would be seeking to utilize more 3D printing in its manufacturing process. The perception caused one Wall Street firm to publish a report suggesting that the stock could double within a year. Other strong performers including low priced issues such as Cyberdyne (+24.54%) and Oceaneering International (+10.41%). Filling out the double-digit returners were iRobot (+13.87%), Aerovironment (+12.97%), and Brooks Automation (+11.48%).

A raft of positive articles regarding recent events surrounding Rockwell Automation propelled the stock up 9.33% during the week. Zachs Research applauded the company’s recent acquisition of a Spanish cybersecurity firm to complement its fast-growing commitment to that market sector. Shortly thereafter, the company and Microsoft announced a five-year partnership to develop integrated, market-ready solutions that will help industrial customers improve digital agility through cloud technology. By combining each company’s expertise in the industrial and IT markets, respectively, teams could work together more seamlessly, enabling industrial organizations to save on infrastructure costs, speed time-to-value, and increase productivity.

Finally, Barron’s Magazine mentioned the company in its lead article entitled - Industrial Stocks Are Getting Ready for 10 Years of Outperformance. Here’s How to Play It.

Other notable contributors to the outperformance of the Bot Index to the broader market included Cognex who gained 7.6%, Accuray Inc. that increased by 7.45%, Intuitive Surgical whose fortunes increased by 6% and NIVIDA and Amazon that rose 5.36% and 5.17% respectively. 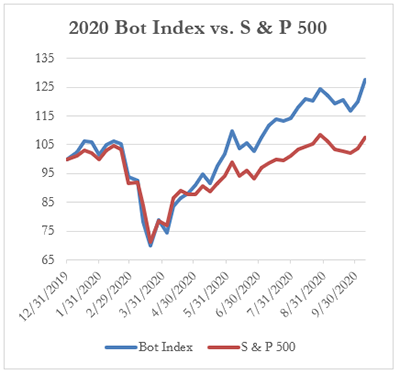 As declared earlier in this issue, the National Geographic Magazine devoted 35 pages and the cover to its, Meet the Robots feature. The tone of the article was generally focused on the myriad of tasks that are currently being performed by robots. While taking inventory, cleaning floors, picking fruit, patrolling borders, arranging flowers, performing religious ceremonies in addition to industrial tasks are commonplace, the article failed to delve into the more sophisticated tasks that white-collar workers perform. As such, there were detracting comments such as was made by MIT economist Daron Acemoglu who said, ”The notion that we’re going to adopt automation technologies left, right and center and also create lots of jobs is a purposefully misleading and incorrect fantasy”.

One interesting observation was the negotiated compromise between the International Longshore and Warehouse Union and the Danish shipper Maersk which ended turmoil over robots on the docks with the promise that 450 mechanics would be ‘upskilled’ to work on robots and another 450 ‘reskilled’ to work in new technology based functions.

One of the components of the Bot Index was featured in the piece and the publicity perhaps contributed to the strong returns listed in last week’s trading. Cyberdyne Inc. was praised by the National Geographic article’s author when he wore one of the company’s exoskeletons in a test of potential industrial uses where strength and endurance would be required. The author conceded that the device would allow humans to be more productive.

Get ready for the robotics A-Team