There is no force on earth more powerful than an idea whose time has come." -Victor Hugo 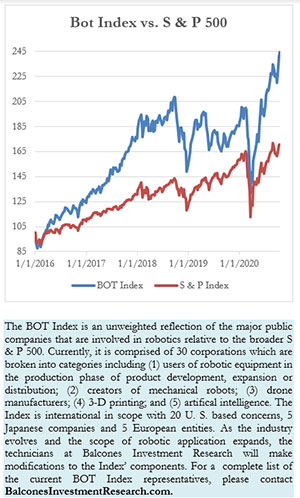 In a somewhat tepid market, the bots again experienced a gain more than the broad market. The Bot Index rose 1.67% during the week as compared with the S & P 500’s gain of some nineteen basis points. The Chinese electric car company – NIO Ltd. jumped a remarkable 32.65% to lead the Index. The momentum was attributed to a bullish report by J.P. Morgan who increased their expectations for the stock to a price of $40. At a closing price of $28.48 that represents a potential upside of over 40%. It is hard to imagine the company’s performance since March when the stock was trading as low as $2.60. In October of 2019 the stock traded at $1.32 and several Wall Street analysts predicted the company would fail. The near 1,000% increase since March is truly remarkable and is prefaced upon dramatically improving fundamentals. Delivery orders have soared, new models are driving (pardon the pun) consumer interest and the company is cutting losses and is nearing profitability when it reports in mid-November.

Joining NIO in the double-digit increase column was the cyber-surgery company Accuray Inc. Accuray has been a three-week period of significant investor interest with consecutive returns of 10.8%, 7.5%, and this week’s 13.9%. This week the company was highlighted in Zachs’ research piece entitled, “3 Best MedTech Value Stocks to Buy Ahead of Q3 Earnings.

Shares of AeroVironment jumped 5.43% this week in addition to the prior week’s 13% gain. Perhaps some anticipation of the company’s award of an $8.4 million contract by a foreign entity for its Puma 3AE Unmanned Aircraft System was the catalyst for the move.

Finally, among the best weekly performers, was Lincoln Electric with a gain of 5.11%. The gain put the stock just over the ‘century mark’ and has exhibited significant momentum since hitting $70.92 in early May 2020.

Three of the four weakest performers within the Bot Index were based offshore. OMRON Corp. (-5.3%), Brooks Automation (-4.83%) and Yaskawa Electric (-4%) joined Oceaneering International (-4.72%) as the poorest performers for the week. Brooks decline was some ‘give-back’ following the prior period’s 11.48% gain. The stock was propelled that week due to an article in Investopedia entitled Top Robotics Stocks for Q4 2020. 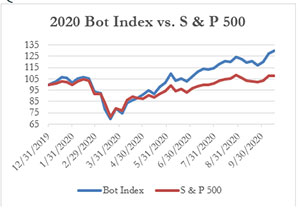 As the LAFD's Thermite RS3, a 3,500-pound robot that is about the size of a Smart car, was being featured in a demonstration last week, it was suddenly called into action. The device is  small enough that it can fit through a double set of doors and features a cannon that can discharge 2,500 gallons of water or foam per minute and align itself vertically to function as a sprinkler. It is operated remotely and can go for 20 hours without refueling. During the demonstration, an alarm came in from the Los Angeles fashion district. Working with over 130 firefighters, the Thermite helped not only put out the blaze, but it also helped clear out debris following the tragedy.

It’s just not calamari! Scientists at the University of California at San Diego have created a ‘soft bot’ for undersea exploration. Designed to utilize a similar propulsion mode as squids, the instrument is made of flexible material and has an ability to move independently. It carries sensors and a camera that serve to provide visual coverage where delicate marine life might be harmed by divers or rigid unmanned apparatuses.

The American Economic Review Volume 2 of the September 2020 issue carried an insightful tome entitled, Rage against the Machines: Labor-Saving Technology and Unrest in Industrializing England. The feature by Bruno Caprettini and Hans-Joachim Voth of the University of Zurich researched the historical files regarding the 1830’s “Captain Swing” riots following the introduction of threshing machines. At that time, the threshing of grain to remove the seed crops from husks represented up to 50% of rural laborer’s winter income. When, in 1786, Andrew Meikle invented the first threshing machine and was later refined, the machines could increase productivity per worker by a factor of 5 times. As laborer income became squeezed, workers rebelled in what was titled as the worst wave of unrest in English history. Over 3,000 riots erupted which led to the execution of 252 insurrectionists.

The authors’ research noted that the intensity of animus was felt most heavily in those regions of England in which there was no alternative urban employment. The forced migration to cities was a primary catalyst into the formation of the Industrial Revolution. In the final paragraph of the article the authors concluded, “Social unrest because of technological unemployment has so far been a rare event – but such tranquility is not inevitable. The Swing Riots demonstrate that rapid, regionally concentrated job losses can quickly lead to political instability and violence.

Many politicians and economists have similar concerns regarding the Robotic Revolution and its impact upon employment. Until recently, technological advancements have impacted low skilled employment. With the geometric leaps in AI and its integration into smart autonomous robots, there is little doubt that skilled white-collar jobs are in jeopardy. It will be interesting to watch the next ten years to see if voice or exit (terms used by Caprettini and Voth to describe rebellion or migration) will characterize the impact of technologically advanced robot employment alternatives.

Tips and tricks for robotic welding. ABAGY has launched a new YouTube channel