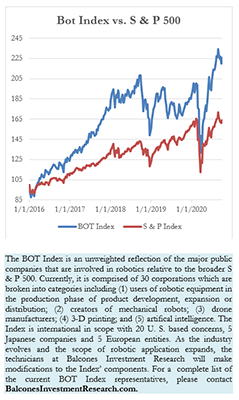 Despite Friday’s announcement of President Trump’s affliction with Covid 19, both the broader market and the Bot Index recorded positive results for the week. In a reversal from the prior week’s favor of the S & P 500, the final week of the third quarter saw the bots gain 2.62% versus 1.51% from the S & P 500. For the first nine months of 2020, the Bot Index reported a near 20% return while the broad market eked out a bit over 3.60%. Strong performances by Faro Technologies (+8.42%), Accuray Inc. (+10.86%) and especially NIO Ltd. (15.61%) led the bots in their superior results.

For the first nine months of 2020, investors evidently bought into the prospects for the  electric car industry. The two EV constituents within the Bot Index both exceeded 400% returns for the Year-to-Date. Of the nineteen gainers for the period, outside of the automobiles, only NIVIDA recorded a more than doubling during the period. The five best gainers were: NIO who rose 426%, Tesla up 413%, NIVIDA up by 122%, Amazon increased 69% and Apple gained 59%.

For just the third quarter, Tesla produced a return of 245%, the best performer in the U.S. stock markets, edging out Zoom’s 136% rise. Likewise, NIVIDA Corp.’s gain of 75.8% was the fourth best of any S & P 500 member. Apple’s 43.9% jump and Intuitive Surgical’s 38% production placed them at sixth and tenth respectively among the Nasdaq 100. 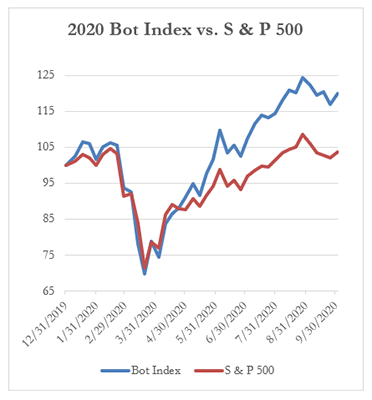 With the start of the NFL season, CNN recently reported on that the Atlanta Falcons and the Carolina Panthers will use drones to sanitize their respective stadiums. Lucid Drone Technologies has been employed to sanitize various areas of the Falcon’s Mercedes Benz stadium while Xenex’s UV drone will combat viruses and bacteria. According to the Falcon’s maintenance management, the use of the drone system provides a 95% reduction in the time generally devoted to cleaning.

In the 2020 IEEE Salary Survey of the engineering world that was reported this September, there were several important takeaways. While the median pre-tax income, at $148,500 represented only a 2.4% increase over the prior year, the level of job satisfaction was the highest in more than a decade. The highest level of compensation was achieved by engineers in the communications technology sector which includes consumer electronics, aerospace, electronic systems, and audio and acoustic signal processing. One area of concern is that despite a concerted effort to attract more female students into STEM studies, the percentage of female engineering respondents was only 11%.