There is no force more powerful than an idea whose time has come."  -Victor Hugo 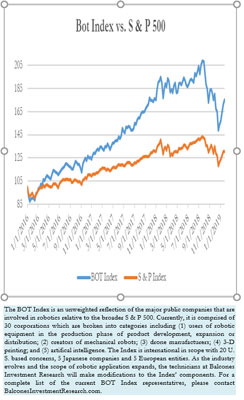 The BOT Index is an unweighted reflection of the major public companies that are involved in robotics relative to the broader S & P 500. Currently, it is comprised of 30 corporations which are broken into categories including (1) users of robotic equipment in the production phase of product development, expansion or distribution; (2) creators of mechanical robots; (3) drone manufacturers; (4) 3-D printing; and (5) artifical intelligence. The Index is international in scope with 20 U. S. based concerns, 5 Japanese companies and 5 European entities. As the industry evolves and the scope of robotic application expands, the technicians at Balcones Investment Research will make modifications to the Index’ components. For a  complete list of the current BOT Index representatives, please contact BalconesInvestmentResearch.com.

In somewhat of an unsettled market, the Bot Index gained over two percent in last week’s trading. This gain was in spite of a slightly negative S & P 500 performance. The bots were aided by two components that achieved double digit results. Cyberdyne attained a remarkable 37.70% move this week, following three prior periods of double-digit performance. The company’s stock has run from $4.20 (near year-end) to close at $7.67. In a bit of a recent roller-coaster ride, shares of Accuray Inc. increased by 15.50% as opposed to the prior week’s loss of 3.25% and the week before that when it produced 16.62% for shareholders. The only other significant contributor to the Bot Index’ returns this week was Textron. The company’s fortunes rose 6.48% after the firm announced that increasing demand for business jets encouraged management to provide 2019 guidance at a level above analysts’ expectations.

Leading the weaker names for the period was Intuitive Surgical whose drop was prefaced by a disappointing forth quarter earnings (missing consensus earnings of $2.99 by 3 cents). Analysts were also concerned with a management comment that operating expenses for 2019 would increase by 20%-28%, further draining earnings expectations. Other weakness was noted by IRobot, down almost 4%, and Faro Technologies, Immersion Corp., and Keyence, all of which were off around the 3% mark.

The newest component of the Bot Index, Qiagen N.V., made its debut this week with a .62% gain.

The American Economic Journal of Macroeconomics and The American Economic Review each produced interesting articles in their most recent publications. The first, entitled “Demographic Structure and Macroeconomic trends generally provided empirical evidence that, due to world-wide demographic changes, economic activity and innovation would decline precipitously. With an aging population, their hypothesis is not unlike the old economic theory that the intrinsic growth rate of any economy is a function of the labor force growth rate and productivity. The authors note, “Demographic changes, through their impact on labor supply, are often seen as one of the ‘headwinds’ of the observed slowdown in macroeconomic performance (since the 2008 recession). We argue that demography matters more generally for macroeconomic activity, altering demand, supply, and the production of ideas.” In their conclusion their model suggests, “Demographic factors are predicted to depress average annual long-term GDP growth over the current decade (2015 – 2025) by .64% in our sample of OECD countries.”

In the second article Michela Girocelli from UCLA wrote, “The Long-Term Effects of Management and Technology Transfers” about U.S. involvement in training and technological sharing with Italian firms in the early 1950’s. This was a period when the U.S. developed an educational cooperative with Italy whereby a number of Italian firms would visit U.S. factories and managements. Unfortunate, the budget was cut which allowed only a certain number of the Italian entities to participate. This turned into an excellent opportunity to for Giorcelli to study the results of the control group versus the excluded group. Her findings were, “firms that sent their managers to the U.S. were more likely to survive and had higher sales, employment, and productivity than the excluded companies. These effects were large and grew over time for at least fifteen years after the program. The productivity of treated firms rose by 15% within one year, relative to the comparison group, and continued to grow without reaching a plateau, with a cumulative increase of 49.3% in 15 years. The technology transfer also boosted firm performance, but the gains did not persist. The productivity of treated firms rose gradually by 11.5%, relative to the technology comparison group. Third, there was a complementarity between management and technology. The effects on firms that received the combined management and technology transfer were significantly larger than the sum of the single transfers. For instance, their productivity increased by an additional 12.1% in 15 years, relative to the sum of the other two transfers.”

While the two articles neither complement nor refute the other, they each offer glimpses into the delicate nature of what we call ‘productivity’. The first article completely ignores the fact that technological advances can vastly increase productivity and can overcome demographics in their contribution to world economic growth. The advent of robotics to the production equation completely shatters labor force growth rate declines in determining the world growth formula. As famed Wall Street analyst, Barton Biggs once wrote, “technology will always trump perceptions of invariability through hypothesis.”

The second article is of more interest with its statistical reveal of how superior growth can be attained through management skills and technological transfers. We are on the cusp of a massive level of international technological expansion that is likely to significantly contribute to world growth through robotics and artificial intelligence. The Bot Brief firmly believes that the contributions from robotics have yet to be fully appreciated and, in the coming decades, will heavily influence economic growth and social progress.