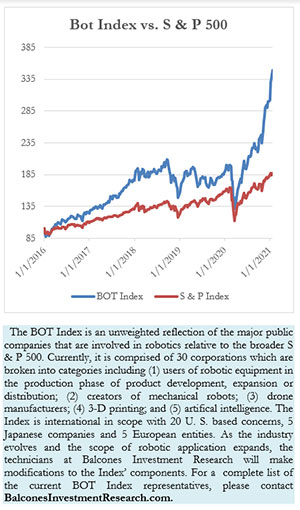 The Wall Street Journal wrote an article that featured the comment, “100 years after the word ‘robot’ entered the English language, autonomous devices are taking over – but not always in the ways sci-fi writers have imagined.”

In looking at the charts of the Bot Index versus the performance of broader averages, it would be hard to dispute the ‘taking over’ comment from the Journal. In fact, the byline of the Bot Brief has always focused on the fact that the concept of robotics as an idea whose time has finally come to fruition. With this in mind, the Bot Index rose 3.93% last week as compared to the 1.94% return of the S & P 500.

iRobot continued its three-week string of strong performance and caught the attention of Investors Business Daily who commented that the stock had reached an attractive technical level.

AeroVironment’s jump of 14.24% complemented its recent string and NIO Ltd.’s 10% gain followed an Investor Place feature entitled, “NIO Stock is a Proper Vehicle to Bet on the EV Revolution.”

Virtually all the weaker names in the Index were in the defense industry. Raytheon Technologies fell 2.36%, Lockheed Martin fell 2.13% and Northrup Grumman declined eighty-six basis points. 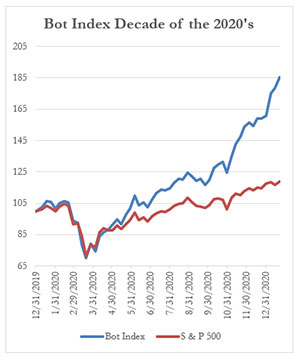 On the 19th of January, the Bot Brief had the opportunity to view the efforts of Embry Riddle engineers as they prepped for participation in the Maritime RobotX Competition. Initiated in 2013 for colleges, the competition seeks to develop automation skills for maritime commercial and educational applications. Much like the FIRST program for younger students, the Maritime Robotics effort has an established mission that each of the 15 or so universities must complete in an autonomous fashion. There are preset obstacles and objectives that the watercrafts must recognize and fulfill.

The Embry Riddle team is advised by Dr. Eric Coyle and Dr. Patrick Currier and run by 15 to 20 students from aerospace, mechanical engineering, electrical engineering vocations and unmanned autonomous engineering studies. Many of these are graduates of other collegiate competitions that focused on underwater, ground vehicles, water surface, NASA, and aerial courses.

The Embry Riddle craft, named Minion, is a catamaran about 16 feet in length and is chocked filled with multiple lidar, sensors, computers, propulsion, energy, and communication equipment. Unlike some of their competition, Minion carries a flat deck for launch of an autonomous aerial drone as well as a compartment for a tethered underwater submarine. Dr. Currier indicated that the submarine, while currently tethered to reduce risk, takes all its instructions autonomously from Minion’s computers. 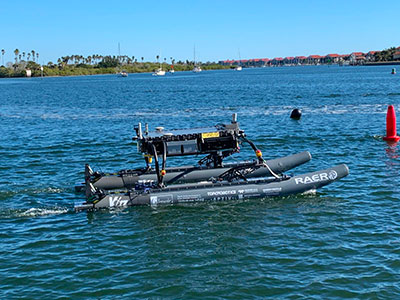 The covid crisis has put the kibosh on travelling to a central location for the various colleges to compete, so we were fortunate to see the team go through their paces here in Central Florida. Professor Coyle indicated that the best showing for Embry Riddle was in 2018 when they came in third despite snagging one of the black buoys in the course. Unfortunately, the black buoys absorb light much as does water, making it difficult for the lidar to distinguish the difference between a wave and the buoy. The teams from Singapore and Australia defeated Embry Riddle and, unfortunately, with the 2022 competition possibly to be held in one of those locations, Embry Riddle will likely be facing home team advantages!

The cost of construction and competition travel is extensive, and the university is fortunate to have grants and corporate sponsors, however, is always seeking donations. Among the companies that provide equipment and technical support are: Teledyne, Volz, Glenair, Velodyne Lidar, Torqueedo, Torc Robotics, Northrup Grumman, Copenhagen Subsea and Pelican. While there are immense educational advancement byproducts from the competition, the ‘end game’ is to create technological advances for commercial use in port operations, surveying and acoustical based underwater retrieval situations.

Robotics For All Podcast by AV&R! - Season 2

Should You Invest in Robotic Manufacturing In Tough Times?