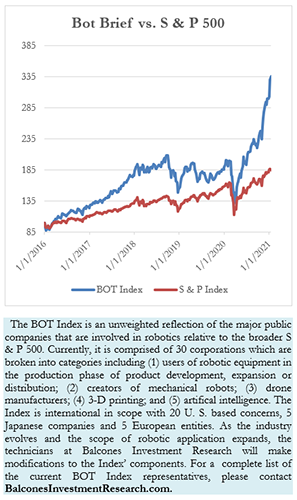 Despite a relatively fragile market last week as reflected by the S & P 500’s 1.47% decline, the Bot Index actually experienced a respectable 1.86% increase. Paced by four companies within the portfolio that generated double digit returns, the bots were bolstered by several reports of good news in the sector.

Following the doubling of 3D Systems in the prior week, DDD added another 20% in its showing last week. It is hard to conceive that just on January 6th, the stock was trading at $11.24 and is now above the $28 range. The results would have been even greater had not the stock slid 11% on Friday following a warning by J.P Morgan analysts that the stock was overvalued and cut their rating to underperform.

AeroVironment Inc. rose 25.84% during the week following its announcement that it had acquired Arcturus whose product line will be complementary to AeroVironment’s current line of unmanned drones.

Brooks Automation and iRobot both were included in a Zacks feature entitled, “Five Robotic Stocks to Watch Amid Rising Shift to Automation”. As a result, Brooks gained 14% and iRobot rose 6.3%.

Finally, Oceaneering International jumped 11.13% after it announced that it had obtained over $255 million in contracts for its remotely operated underwater vehicles for the oil and gas industry.

There were only three components of the Index that experienced notable declines. Tesla was singled out in an interview with Jim Chanos, the notoriously successful short seller. He stated that “Tesla has a problem”. The comment sent the stock down 6.12% and probably carried NIO Ltd. off 4.5%. Intuitive Surgical declined 5% despite the reporting of an excellent fourth quarter and annual earnings. 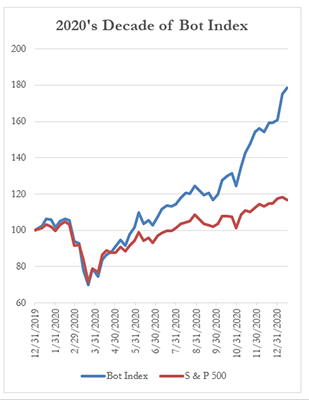 Job Reallocation in a Robotic World:

The December edition of The American Economic Review carried an in depth and complex research document entitled, ‘Changing Business Dynamism and Productivity: Shocks versus Responsiveness.’

Within the lengthy article the authors from the Federal Reserve Board, the Census Bureau, and the University of Maryland noted that, “the responsiveness of business-level employment to productivity has weakened.” The article hints that businesses have somewhat unable to expand the pace of job reallocation due to idiosyncratic shocks. The shifting of resources to enhance productivity has not reflected business’ ability to cope with these shocks from both external and internal considerations.

In their final paragraph the authors concede that job reallocation is costly. “While job reallocation can facilitate job growth and job-to-job transitions, an important source of wage gains, job destruction imposes profound costs on workers, families and communities. Optimal policies for labor and other markets must balance these considerations against the benefits of productivity-enhancing reallocation for overall living standards.”

It is likely more research will be forthcoming from academia as robots begin to make further incursions into the job market for the sake of productivity. The balance between ‘the social’ implications of such job reallocations, the need for international output efficiencies and the consumers’ ability to expend the output of robotic production will be a unique economic enigma.