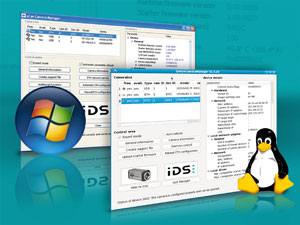 Version 3.80 of the uEye driver software offers a number of functionality updates, and ones that are even more user-friendly. IDS is introducing the new version at VISION 2010. The new release is identical for the full line of IDS GigE and USB cameras – appropriate considering the manufacturer’s philosophy “one for all” – and is available for both Windows and Linux. This allows individual camera models in the existing applications to be easily exchanged and allows applications to be ported quickly between two platforms.

With software version 3.80, special features of the latest camera models, such as the GigE uEye CP with Power over Ethernet, can be utilized to the fullest.

The uEye API was enhanced with many features, for example the line mode and multiple AOI (Area of Interest) mode are both now available for the tried-and-tested UI-1240 and UI-5240 models. Also, you can now set and move image areas even faster. All features of the software development kit can be integrated into current programming languages such as C/C++, C# or VB.NET. The included uEye Demo program has also been enhanced. It can now process images with up to 12 bits and can save them in PNG format.

In addition, driver version 3.80 contains a new program for editing the hot pixel calibration. While IDS calibrates all sensors during assembly to detect hot pixels resulting from the manufacturing process, there are instances in which users would like to further expand the factory calibration. This is now possible with the “hot pixel tool”.

The uEye software package is available for both Windows and Linux.  The Linux version supports 32 and 64 bit systems with kernel version 2.6 and higher and was tested successfully with many current distributions. Portings for embedded Linux systems are also available upon request. The driver update is available free of charge and can be downloaded from www.ids-imaging.com/go/ueyedrivers.