VECID for Make and Model – recognizing cars better than the human brain? 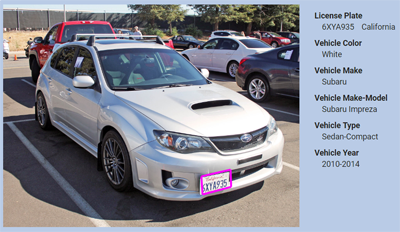 The human brain makes visual recognition seem very easy. A human can distinguish between a panda and a polar bear without effort. But with a computer such tasks are pretty difficult to solve.

In the last couple of years Machine or Deep Learning has set out to solve those difficulties. EVT offers therefore the VECID (= Vehicle Identification) tool set for the recognition of car type and model, also called "Make & Model". "Make" means the maker of a vehicle, such as e.g.: Ford, Toyota, Honda, etc. and "Model" is the specific name of the vehicle such as e.g.: Focus, Accord, Pathfinder, etc. For some people this is a very straight forward task, especially for car aficionados. A human brain can recognize cars according to some main characteristics such as logos, hood ornament, labels, etc. But for a computer it has been a difficult task so far, due to the visual complexity of vehicles.

The Deep Learning VECID tool set can recognize the car model and can tell you for example the difference between Audi and VW. It can also tell you the year of manufacture of the same model, which is extremely difficult for human brains.

Of course not only cars of the same maker look similar but also the SUV models of different makers or the Sedan of Audi and BMW. Make and Model recognition not only can see the obvious, but also can differentiate between cars, which even for human eyes are difficult to tell apart. Hatchbacks of makers such as Nissan and Toyota can look similar, when the pictures are taken on a busy road with several cars passing by. But that is no problem for VECID. You might think: "But there is a logo on the car." This should make it easy, no? But what if you cannot see the logo, and what about the year of manufacture and the model of every car in e.g. Asia or USA?

The main challenge is to reach a fine-grained classification. One should keep in mind, that Deep Learning is not feasible under conditions such as little time, little computing power or little data.

Neural networks are the base for Deep Learning, with several layers. Best to imagine a family of models, which are “loosely” inspired by the human brain. For “Make and Model” it is important to keep in mind that, the bigger the data set of classified images of cars the better.

Instead of teaching the computer every possibility of car models, we feed the Deep Learning program tons of existing images.

A neural network is built of artificial neurons, which are set in layers. A neural net with more than two “hidden layers” is called a Deep Neural Network. The more layers the more complex the patterns can be recognized.

Sounds easy to build a big neural network and call it AI (artificial intelligence) but, don’t forget some essential points:

Make and Model recognition of cars is nowadays a very popular element for automated systems, such as traffic control or surveillance of law enforcement.

In addition is Make and Model also used at toll roads and for border control, as well as for statistics of traffic flow and density.

EyeFI – The Sensor for the Inspection of Filaments