Odense, Denmark: Universal Robots, the Danish manufacturer of industrial robots, has celebrated the opening of its new company headquarters in Odense, Denmark. Moving into new facilities will extend production capacity considerably, hereby underlining the ambitious growth plans of the company; A turnover of one billion Danish 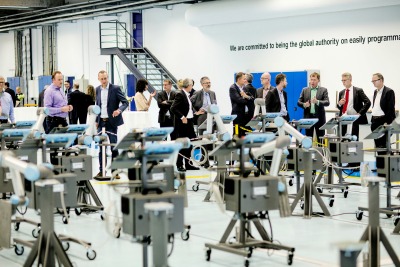 Opening receptionTotaling 12,000 square meters, the new headquarters will be seven times bigger than the former Universal Robot domicile. The move underscores Universal Robot’s ambitious goal allowing the Danish manufacturer of lightweight robots to keep expanding at a rapid pace in the years to come. Ever since the first UR robot hit the market in December 2008, the production has doubled annually, reaching the limits of the company’s old production facilities.

“Our new premises allow us to increase daily production to more than 150 robots. This expansion of production capacity is urgently needed, as we plan to sell 2,000 robots in 2014. Furthermore, we plan to keep doubling our sales every year from 2014 to 2017,” says Enrico Krog Iversen, CEO of Universal Robots, outlining the growth ambitions of the company.

The success story of the Danish manufacturer of lightweight robots began in 2008 as a university research project starting out with 5 employees, a number which has now grown to a staff of more than 110. Aside from production facilities and sales offices, the new domicile also includes the Universal Robots Advanced Training Center:

“Denmark is and always will be our robot-stronghold. With the planned increase in production, we will be able to create approximately 200 new jobs at Universal Robots. This will lead to further growth at the suppliers and dealers we collaborate with, so that our expansion might lead to indirectly creating another 300 new jobs in the Odense region,” says Enrico Krog Iversen, explaining the consequences for the local job market.

\The festive opening on April 11 was attended by government officials, investors, business representatives as well as Universal Robots staff and partners.

The UR robots
Universal Robots is a result of many years of intensive research in robotics. The product portfolio includes the UR5 and UR10 models that handle payloads of up to 11.3 lbs. and 22.6 lbs. respectively. The six-axis robot arms weigh as little as 40 lbs. with reach capabilities of up to 51 inches. Repeatability of+/- .004” allows quick precision handling of even microscopically small parts.

If the robots come into contact with an employee, the built-in force control limits the forces at contact and does not cause bodily harm, adhering to the current safety requirements on force and torque limitations. With Universal Robots it is easy to develop applications that can run without shielding. A thorough risk assessment must however always be made.

The collaborative robots can quickly be moved around the production sites and are easily integrated in all industries - from the small machine shop to the large auto assembly line. Payback period is typically 3-8 months.

Watch the robot in action: http://bit.ly/UlaUgw and come try one out at ATX East in New York June 10-12 and at IMTS in Chicago September 8-13.

The company
Universal Robots is a first mover within a new segment of collaborative robots focusing on user friendliness and flexibility. Since the first UR robot entered the market in December 2008, the company has seen substantial growth with the robotic arms now being sold in 50 countries worldwide. The company is headquartered in Odense, Denmark where all development and production is carried out.