Following rapid market expansion in the U.S., Universal Robots, is pleased to announce Scott Mabie as General Manager. In his new position, Mabie will oversee operations in North and South America. 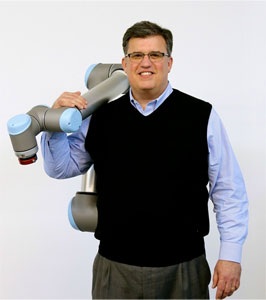 Since entering the North American market in the fall of 2012, Universal Robots has pioneered the emergence of collaborative robots, penetrating a wide range of industries coast to coast. With a doubling of year to year revenue, the Danish robot manufacturer with U.S. headquarters in New York is now opening new sales offices in the Midwest and on the West Coast. A South American sales division will launch in 2015.

“We’re excited to have him lead the team that will accelerate growth in the Americas.”

Based in Ann Arbor, Michigan, Mabie comes to Universal Robots from a Business Unit Manager position with Rofin-Sinar Inc., one of the leading global manufacturers of laser sources and laser-based solutions for industrial materials processing. Prior to this he was Director of Business Development with Danotek Motion Control.

“I look forward to this unique opportunity. Universal Robots is a profitable, well-managed company operating in a market space that increasingly demands the UR robots. I enjoy the company’s entrepreneurial spirit; my new colleagues both in Denmark and in New York are very passionate about what they do, and they do it well,” says Scott Mabie.

“I’m excited to build on the formidable groundwork with a strong distribution base and an extensive training and support division created by our National Sales Manager, Ed Mullen. Ed has been instrumental in taking Universal Robots from being relatively unknown in North America two years ago to becoming today’s market leader of collaborative robotics. ”

The expansion means that Universal Robots will soon be hiring additional sales managers and technical supporters to be stationed in the new sales offices.

“Opening up new hubs in our growth regions, brings us closer to our distributors and value added partners, enabling us to offer unparalleled service and support,” says CEO Enrico Krog Iversen.

About Universal Robots
Universal Robots is a result of many years of intensive research in robotics. The product portfolio includes the UR5 and UR10 models that handle payloads of up to 11.3 lbs. and 22.6 lbs. respectively. The six-axis robot arms weigh as little as 40 lbs. with reach capabilities of up to 51 inches. Repeatability of +/- .004” allows quick precision handling of even microscopically small parts.

Since the first UR robot entered the market in December 2008, the company has seen substantial growth with the robotic arms now being sold in more than 50 countries worldwide. The company is headquartered in Odense, Denmark, where all development and production is carried out. The company’s global sales target is a doubling of revenue every year from 2014 to 2017.

The Importance of Preventive Maintenance for Industrial Robots