The RoboDK plugin for SolidWorks is now available

Ever wished that the link between your CAD package and RoboDK was more streamlined? With the new plugin, we’ve made your SolidWorks workflow even smoother.

Here at RoboDK, we think our software is easy to use. We work hard to make sure the software is quick to learn, simple to use, and fits right in to your existing workflow.

But, until now there has been one part of the process which was not as quick and easy as we’d have liked it to be: the integration with Computer Aided Design (CAD) packages. Up until now, you’ve had to export your models from your favorite CAD package and import them into RoboDK. Sure, this is very straightforward… but we’ve decided to make it even easier.

Last month, we released a new set of plugins for RoboDK for a selection of third-party platforms, including the all-popular SolidWorks.

If you’re using SolidWorks, the new plugin promises to make your workflow significantly smoother. Let’s take a look at the new plugin and see what’s possible with it.

If you’re not familiar with SolidWorks… where have you been all your life!?

The brainchild of a Blackjack-playing MIT genius, SolidWorks has become the most popular CAD software in many industries. If you don’t know SolidWorks yourself, you’ve almost certainly used products which were designed with it.

It is primarily a “solid modeler,” which means that models are built from virtual solid parts, much as real objects are made. The alternative to this is “surface modeling” which defines models by their surface geometries. Although these two modeling techniques were traditionally very different, modern versions of SolidWorks can use either of them. It’s a hugely flexible design package.

A bit of fun trivia for you: The software was the brainchild of Jon Hirschtick, one of the members of the famous MIT Blackjack Team who beat casinos using card counting. In 1993, he used some of the money that the team won to assemble a group of engineers and develop the first version of SolidWorks.

Since then, it has become one of the standard CAD packages in many industries. According to a 2015 survey of 215 CAD/CAM users, SolidWorks was by far the most popular CAD software with 27% of users, almost double that of the next most popular package.

Introducing… the RoboDK plugin for SolidWorks

Our new plugin adds a seamless link between SolidWorks and RoboDK.

When you update to the latest version of RoboDK, (which you can get on the Download page), you should find that it is already installed as new “RoboDK toolbar” within SolidWorks. If you can’t find the toolbar, see the documentation page for instructions on how to perform a manual install.

As described on Engineering.com, the plugin acts like a one-way bridge from SolidWorks to RoboDK. You can use this bridge to send paths, curves, points, and models, which will be automatically loaded into RoboDK in a format which makes them easy to use for robot programming.

Is the Plugin Right for You?

If you are already using SolidWorks and RoboDK then the new plugin is a no-brainer. It’s intuitive to use and will streamline your workflow considerably. 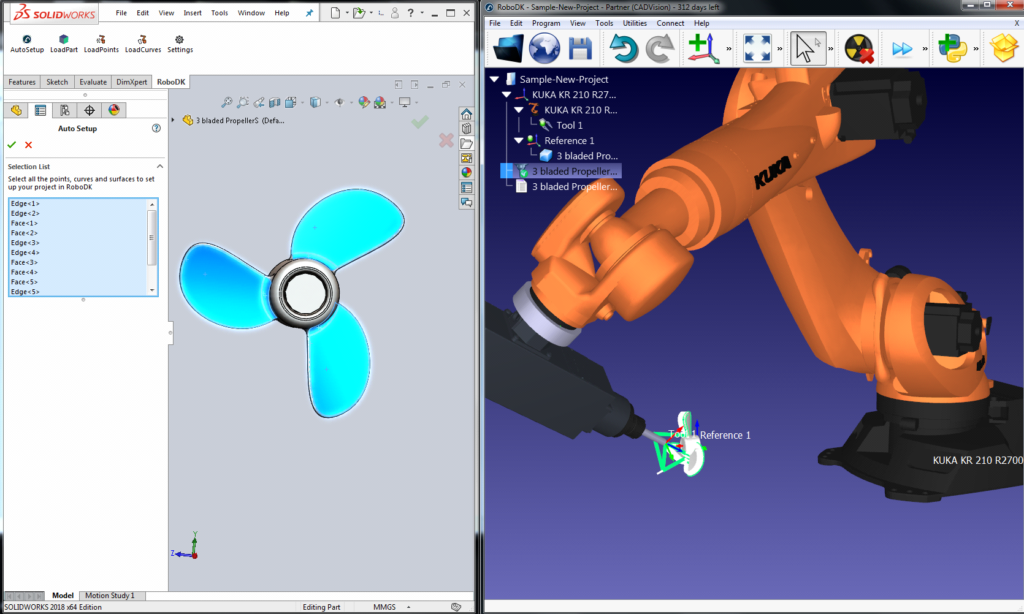 If you’re not using RoboDK yet, but you are a SolidWorks user, the plugin is a perfect excuse to give RoboDK a try! You can get a free demo version on the downloads page.

5 Tasks That Are Very Easy With the SolidWorks Plugin

There are a few tasks which have become especially easy with the new SolidWorks plugin. These were already pretty straightforward with RoboDK.

Above all, the new plugin gives you a seamless link between your favorite CAD package and the powerful robot programming capabilities provided by RoboDK.

Finally, here are a couple of very useful features of the plugin which you might miss on first inspection. They can be found by clicking the Settings button in the plugin toolbar within SolidWorks.

Want to try out the plugin for yourself?

The best way is to download the latest version of RoboDK (if you haven’t already) and just give it a spin!

Jeremy’s video is also a great demo of its capabilities and the documentation page explains its functionality in detail.

How to Escape from “Pilot Purgatory” in Manufacturing