The Health of the Machine Vision Industry

While the machine vision industry is largely global in scope, most analyses of its financial health have focused on sales performance within a single geographic region. Unavoidably, this has ignored the overall profitability of machine vision (MV) companies, as they strive globally to meet their financial objectives.

For the first time in its history, the Automated Imaging Association has begun to address this shortcoming with the preparation of a new financial study. The new study is two-part, consisting of a financial ratio analysis and an analysis of stock market performance of twenty-eight of the world’s largest, publicly-traded MV companies over a three-year period.

Financial ratio analysis, an important analytical tool used by lenders, investors and uppermanagements of companies, utilizes financial measures based on formulas and accounting data extracted mainly from companies’ income statements and balance sheets. Lenders use financial ratio analysis to assess the credit worthiness of companies seeking loans. Investors use it to decide whether to purchase the stock of a company, and uppermanagement utilizes it to detect disequilibrium indicative of immediate or long-term risk.

To better assess the financial health of the MV industry, it is useful to first consider the health of the global economy. Exhibit 1, which shows a plot of the percent change in annual, real GDP (gross domestic product) for some major, national economies and regions of the world, paints a picture of economic growth that is strong on average in Asia, stable and improving in Europe and weakening in North America.

All in all, the International Monetary Fund (IMF) expects total global GDP growth of 5.2 percent in 2007 and 4.8 percent in 2008 due in part to the stellar growth of China’s economy. 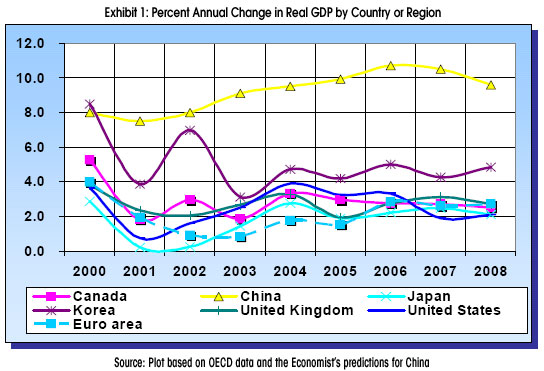 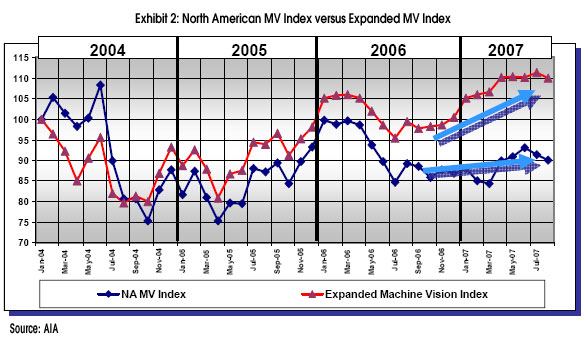 This difference between the indices stems primarily from the performance of European MV companies, which appears to have benefited from a stronger economy in Europe. (The OECD’s September 2007 view places real GDP growth for the U.S. at only 1.9 percent in 2007 and 2.1 percent in 2008. By contrast, it forecasts growth at 2.6 percent in 2007 and 2.7 percent in 2008 for the “Euro area”.) All in all, the Expanded MV Index indicates a solid market performance for the MV industry as a whole, however (as is revealed in AIA’s new financial study) that performance falls short of overall market performance; the DAX, TSX composite and NASDAQ composite all outperform the MV industry (as represented by the Expanded MV Index).

The results of the financial ratio analysis lend additional support to the view that the MV industry as a whole has enjoyed solid --although not spectacular-- performance. While the findings of AIA’s new financial study are highly detailed, a few highlights pertaining to profitability, liquidity, bankruptcy risk, leverage and price-to-earnings (P/E) ratios suffice to make this point.

Regarding profitability, the study utilized a number of measures including rates of return on equity (ROE), sales (ROS) and assets (ROA). The average three-year ROE was found to be the highest of the measures at 3.6 percent, followed by ROA at 3.1 percent and ROS at 2.5 percent. These returns indicate that the industry has been modestly profitable on average.

Adding to this good news are findings regarding liquidity, bankruptcy risk and leverage. The study found that a lack of liquidity is generally not a problem with current assets on average almost four times current liabilities. For the most part bankruptcy is also not a risk for the industry with healthy relationships on average between earnings and assets and between cash flow and debt. Furthermore, the study found very few over-leveraged companies; the typical capital structure of an MV company being 60% equity and 40% debt. Finally, the study determined that the average P/E ratio for the industry was quite reasonable with stock prices approximately twenty-five times earnings per share (EPS). Thus, it appears that MV company stocks on average are not over-priced.

Based on the results of the analysis of stock market performance and financial ratios, the new AIA financial study concludes that the prognosis for the MV industry is good; the MV financial industry is healthy, exhibiting the moderate performance that one might expect from an established industry.

How to Help Customers Maximize Their Machine Vision ROI

3D Machine Vision: Flexibility is the Name of the Game