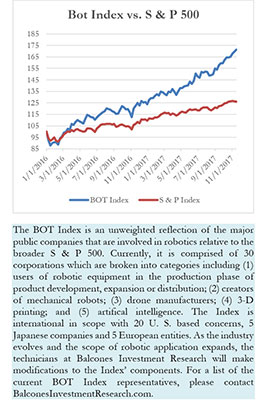 Bot Brief Index Highlights: Despite extreme turbulence in the markets as both houses of the U.S. Congress vacillated over the terms of the tax package, the Bot Index gained a bit over 1% in trading last week. The gain allowed the index of robotic companies to hit an all-time high level of $171.21. Fully half of the Index’s components either gained or lost in excess of 2.25%. Six companies of this barbell distribution of performance rose over 3%, while nine stocks were reduced by 2% or greater.

Bot Index gainers were led by Ekso Bionics who rose 56.21% on top of the 35.4% gain of the previous week. The company’s future prospects appear more attractive to investors since the announcement that Ford and the UAW were beta testing Ekso’s exoskeleton assist units. As we reported last week, the devices have received high marks by the actual factory testers in a collaborative human/robot production interaction. Other stocks contributing to the Bot Index’s gain included: Cognex (+3.05%), IRobot (+3.85%), Accuray (+3.22%), YASKAWA Electric (+4.26%) and OMRON Corp. (+3.62%).

Rewalk Robotic’s decline of 16.67% was the worst of the week’s negative returners. The fall was attributed to pricing and uses of a 6.8 million share public underwriting. The shares were price-set at $1.05, well below the prior week’s closing price of $1.38. Interestingly, Zachs Investment Research generated a report of its screening of 5 “Breakout Stocks Offering Admirable Returns”. In reviewing the screening techniques, The Bot Brief has considerable doubts about the veracity of the analysis. In addition to Rewalk Robotics, other stock weakness was noted by NVIDIA (-2.25%), Textron (-2.89%), 3D Systems (-4.68), Apple    (- 2.59%, AeroVironment (- 2.37%), FARO (who announced an acquisition of Dustin Forensics fell 2.26%), Oceaneering International (-7.74%) and Immersion Corp.     (-3.85%).

An Interesting Arbitrage Situation:
Late last week Emerson Electric announced it was sweetening its acquisition offer for Rockwell Automation (a component of the Bot Index). The company has now conducted three solicitations for Rockwell and the value of the current offer is $225.00 (of which $135 is in cash and $90 in shares of EMR). The prior offer, in October, caused shares of ROK to increase to $210.72. The stock closed on Friday at $193.61.

While the Bot Brief is hesitant to  make recommendations on individual stocks, we would be remiss not to note the significance of the arbitrage of this situation. Perhaps the best way to play the potential, should the transaction be consummated, would be the writing of a cash covered put. As of last Friday, the January  ROK $200 put was trading at a bid of $10.10 with an asking price of $11.10. Therefore, for every 100 shares of ROK thus encumbered with a put, the writer would likely receive something close to a $1050 premium. For this consideration, the writer is obligated to purchase the stock at $200 (which is $6.39 above the current price, but $25 below the value of the Emerson offer). As in every ab speculation, the opportunity is the differential between current price and the offering price of the acquisition target. With the cash-covered put strategy, each upward movement of the stock price will commensurately reduce the cost of the option writer’s obligation. If, by the January 19th expiration of the put, the stock of Rockwell is above $200, the option will expire worthless and entire premium will accrue to the writer. Certainly, there is a risk that the deal could fall through or the stock price of Emerson could drop to a level that reduces the value of the transaction. In any regard, the option market is fluid and the writer could close out the obligation at any time or, if held to expiration and the put is exercised at $200, the writer simply owns a great company at a predetermined price.

The Bot Brief is designed for economists, investment specialists, journalists and academicians. It receives no remuneration from any companies that may from time to time be featured and its commentaries, analysis, opinions and represent the subjective views of Balcones Investment Research, LLC. Due to the complex and rapidly changing nature of the subject matter, the company makes no assurances as to the absolute accuracy of material presented.