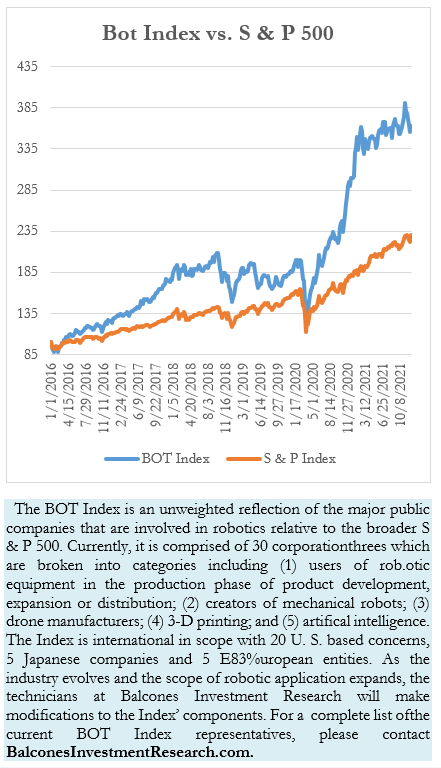 After experiencing four straight weeks of negative performance, the Bot Index recovered by 2.04% last week. While admirable, the Index failed to match the 3.82% gain of the S & P 500.

The Bot Index was led by strength in virtually all the Asian components. NIO Ltd. rose 6.60% while Fanuc, OMRON, Yaskawa Electric rose 5.04%, 6.28% and 6.79% respectively. The leading domestic gainer was Apple who recorded a 10.88% increase.

Part of the central theme of the Robotic Revolution is to make the creation of ‘things’ more efficiently, accurately and safely than human labor. The substitution of capital for labor drove the Industrial Revolution and certainly had an enormous impact on efficiency, consistency and productivity in goods manufacturing. That substitution made transportation more rapid, textiles more consistent, farming more mechanized, communication more universal and equipment more powerful. Productivity leaps were amazing and one new application spawned more and more innovations.

That leads us to the paradox of today. With vast sums of money going into AI and robotics, why do not the statistics of the results of this capital spend show increased productivity. Certainly, productivity is a bit difficult to measure. While it appears that we are at the early stages of the Robotic Revolution, keep in mind that the First Industrial Revolution lasted from 1760 til 1840, while the Second Industrial Revolution ran from 1870 to the mid 1900’s. The major positive impacts of each period were not felt until the latter stages. Economists agree that the capital commitment brought about significant population growth, unprecedented economic activity and vastly favored the countries that adopted its power.

Perhaps it is the lagging effect of the current capital commitments to robotics that is yet to be overcome. With the Labor Department’s recent release of the dismal third quarter productivity report, we can only hope that history is a repeat of itself regarding capital spending and its delayed impact. During the third quarter, productivity fell 5.2% quarter over quarter, or the fastest rate since 1960! On a year over year rate, the drop was the worst since 1993. Unit labor costs rose 9.6% due, in part to inflation and a paradoxical shortage of labor.

In the October edition of the American Economic Association’ Review, Enrico Moretti of Cal Berkeley, authored a paper entitled The Effect of High-Tech Clusters on the Productivity of Top Inventors. Within the text he quotes, “The ten largest clusters (of the high-tech sector) in computer science, semiconductors, and biology account for 69%, 77%, and 59% of all US inventors, respectively. Using longitudinal data on 109,846 inventors I find that geographic agglomeration results in significant productivity gains. When an inventor moves to a city with a large cluster of inventors in the same field, they experienced a sizable increase in the number and quality of patents produced. The presence of significant productivity externalities implies that the aggregation of inventors generates large gains taken together amount of innovation produced in the United States.” Now this certainly makes sense and mirrors the aggregation of growth and power achieved by Great Britain in the First Industrial Revolution and the growth/power shift to the U.S. and Germany in the Second Industrial Revolution.

It is the Bot Brief’s opinion that the Robotic Revolution will follow a similar course to that of the Industrial Revolutions of the past. How long the trailing legs of spending will have on measurable productivity, population changes and economic activity is impossible to predict, however, we are confident it is coming. As in the former revolutionary changes, the rise of the robots will alter the course of mankind for the better. 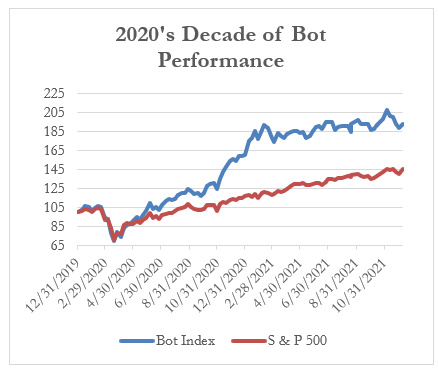