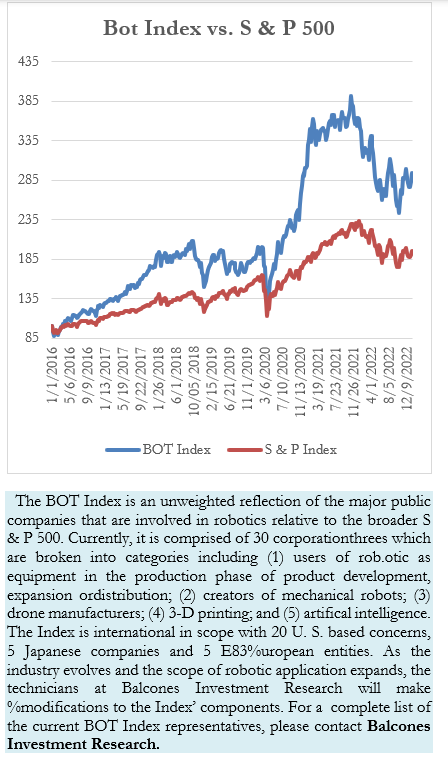 The weakest performers again included several of the defense corporations. Northrup Grumman was the weakest of the four major producers of armaments with a decline of 11.51%. Lockheed Martin fell 4.95%, Raytheon Technologies slid 3.69% and Intuitive Surgical off 4.25%. 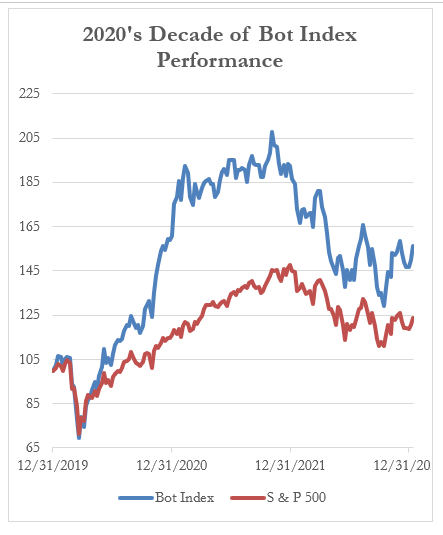 The Bot Brief has devoted considerable ink on hydrogen as a potential raw material in the production of clean energy. Many misgivings and hyperbole have accompanied the machinations of scientists and engineers who have ‘developed’ an answer for fusion energy production. In the latest issue from the IEEE Spectrum Magazine an article entitled Making Green Hydrogen a Reality Down Under, the writer reviewed Australia’s recently enacted climate action law that predominantly features hydrogen power.

A couple of Australian conglomerates are making headlines with their focus on the production of green hydrogen. Arc Energy is planning on using water’s hydrogen employing electricity from a solar power plant. The initial use will be in trucks that are currently involved in the transportation of zinc to port from the refinery. However, the second stage of the project is more ambitious utilization of clean wind power to produce exportable green hydrogen to energy hungry Asia and Europe by 2030.

Another Australian effort, by Fortescue Metals Group intends to invest $6.2 billion to produce 15 million tons also by 2030. Investments have already been made in solar and wind turbines to provide the energy required for the fusion technology conversion into hydrogen. These are impressive goals but, if achieved, could change the face of energy production worldwide.

The second article in Spectrum involves another futuristic goal – that of vertical takeoff and landing vehicles to overcome current land transport. Over the past several years an individual named Marcus Leng has developed a number of prototypes eVTOL’s. Starting in 2010, Leng began building single pilot flying craft in his basement. Along the way, Leng had to build virtually all the components of his vehicles from scratch. With outside funding his OPENER’s Blackfly is attempting to circumvent current FAA regulations by identifying it as an ultralight aircraft, thus avoiding piloting and code restrictions. The goal is to ultimately create a reliable vehicle to quickly move from one location to another without extensive pilot training and with a high degree of safety. If successful, the price of the eVTOL could approach that of a SUV, bringing an new element to personal transportation.