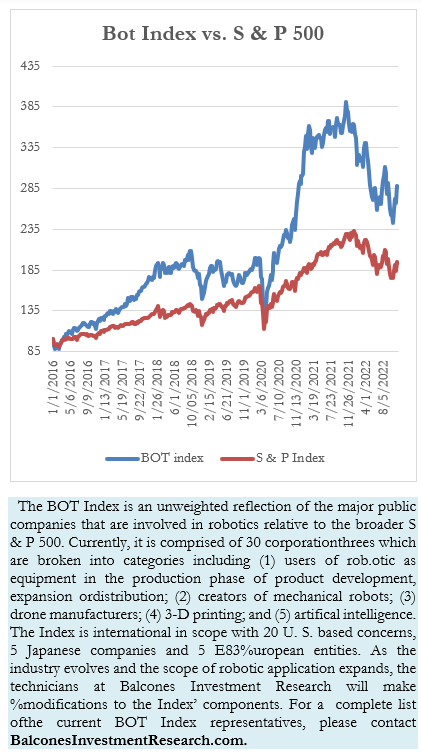 Despite a rather volatile daily market last week, the performance for the week was almost negligible. The Bot Index fell 45 basis points while the S & P 500 declined .64%. The slight outperformance by the bots was due, in part, to double digit increases by Immersion Corp. and Azenta.

Immersion Corp’s near 24% jump was a result of its 3rd quarter earnings report which noted revenue growth that was almost double the year-over-year number. That allowed the company to produce net income of $7.7 million versus the previous year’s $3.8 million and EPS of $.23.

Azenta’s 17.51% jump was also credited to its fourth quarter EPS growth of 34% and full year of six percent. The real kicker, however, was management’s guidance of an expected 30% revenue expansion of in 2023.

Other gainers included most of the defense stocks, due in part, to the launch of a North Korean missile capable of reaching the U.S. mainland. Northrup Grumman led the defense companies with a 5.62% jump. Northrup cheered the success of the moon launch of Artemis which utilized the company’s booster rockets, the worlds largest and most powerful. 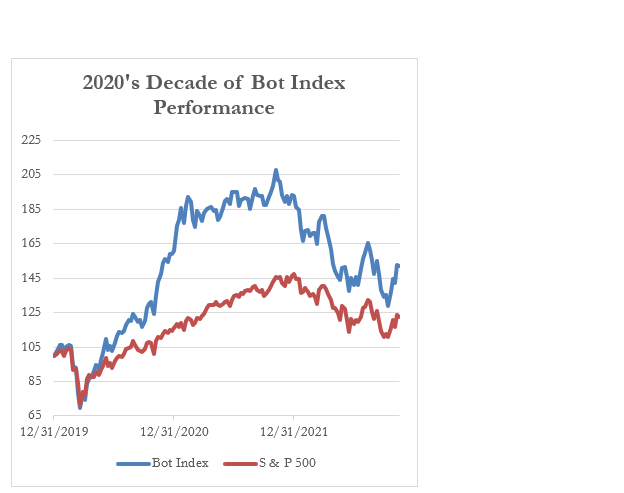 hin the losers’ bracket, the weakest performers were, once again, the electric vehicle manufacturers. NIO Inc. led the downfall with its 9.34% slide as macro troubles in China tend to impact NIO’s sales and Tesla declined a bit over 8% due to a recall of all its Model X vehicles due to airbag issues.

NVIDIA Corp. fell 5.62% as its earnings were off 17% from analysts’ expectations for the third quarter.

Delays in autonomous driving have frustrated robot aficionados over the past few years. Crashes and regulatory concerns have mired the industry but, perhaps, there is a sign that the evolution is progressing more rapidly.  Alphabet Inc's Waymo said it was opening its autonomous ride-hailing service for customers in Phoenix, Arizona on Thursday, pushing ahead with the deployment of robotaxi services in the United States.

Taking a page from Uber, Waymo One utilizes an app to hail a driverless vehicle to ferry passengers on a direct route to their destination or to as many as five different locations within the same trip.

Investors have been worried about the timeline for autonomous vehicle deployment, as it has been stretched by tough regulatory scrutiny, and delayed commercial adoption of the technology.

The autonomous vehicle technology company looks to deploy its Waymo One robotaxi services in Los Angeles and San Francisco in the near future. In San Francisco, a pilot program is allowing customers to participate in testing the taxi service before being available to the general public.

Intelligrated to Showcase Robotic Each Picking at Automate 2017