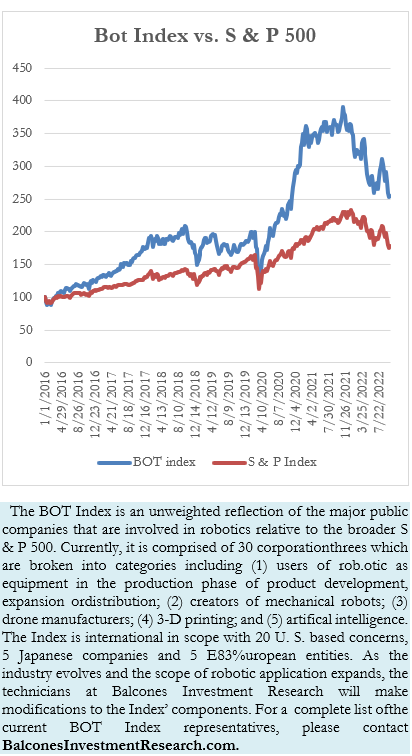 While the first week of trading in the final quarter of 2022 held early promise of a strong rebound, employment numbers dashed all hopes of any Fed easing of its quantitative tightening stance. The broad index gained 151 basis points while the Bot Index eked out a mere .59%. Two holdings within the Bot Index, NIO Inc. and Tesla, both experienced double-digit declines as they continue to grapple with supply chain issues.

Tesla declined almost 16% as investors were concerned about Musk’s reemergence as the new parent of Twitter. Fearing the new venture would distract the savant from his focus on the EV company, investors retreated from the stock. Rival EV manufacturer, Rivian announced a recall of 12,000 vehicles which contributed to investor concerns that impacted both NIO and Tesla. The production issues caused Mizuho Bank to reduce its price targets on both companies.

On the positive side of performance were several of the defense companies, most notably Northrup Grumman and Textron, which gained over 5% each and 3D Systems that rebounded 5.76% from seven declines over the previous eight weeks of trading.

The best performer, by far was the 17.21% jump in Oceaneering International. The increase marked two consecutive weeks where the company led the thirty-stock index. Oil prices, which jumped to $93.20 per barrel of West Texas Intermediate Crude, contributed to the rather dramatic market move. 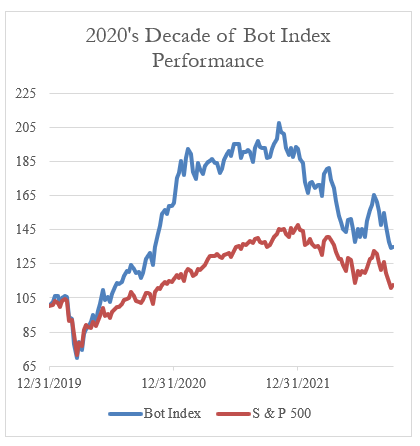 The Korean automobile company acquired controlling interest in Boston Dynamics late last year. The producer of the famous robo-dog’s purchase price of just over $900 million has been followed up with an injection of $400 million to form Boston Dynamics AI Institute. The goal of the venture is focus on cognitive AI, athletic AI, organic hardware design and ethical policies which govern AI.

In a separate letter entitled General Purpose Robots Should Not Be Weaponized, from Boston Dynamics, the company pledged to do its part in leading the robo-world to create robots’ avoidance in their use for warfare. The letter implores, “every organization, developer, researcher and user in the robotics community to make similar pledges not to build, authorize, support or enable the attachment of weaponry to such robots.”

On a lighter subject, the AngelList newsletter, highlighted the growing use of AI in the production of works of art. The use of software such as DALL-E, Midjourney, Stablefusion and MIT’s Combustible Diffusion to create generative art, is becoming a new wave in collector interest that has traditional artist considerable concerned. New developments of crypto artistic efforts are catching favor with a new breed of collectors and investors that could impact the conventional art world.