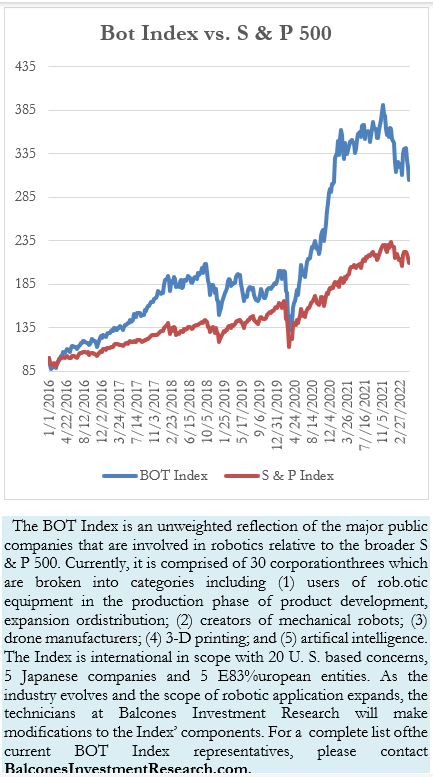 Rising interest rates and indications of more rapid increases within new Fed policies crushed the domestic markets significantly this week. The Bot Index declined 4.36%, while the broad market fell 2.75%. The decline represented the third consecutive weekly retreat by the bots. While there were only two components of the Index that experienced double digit drops, there were only five companies that showed increases. The greatest of those was a mere two percent expansion by Tesla. The stock bucked the market due to the appearance of the successful takeover of Twitter by Elon Musk. While that wouldn’t appear to carry any financial impact upon Tesla, if the takeover is consummated, Musk would join the ranks of providing a powerful media voice. Tesla also benefited from the weakness in EV-rival Rivian Automotive. Finally, a Deutsche Bank analyst upped his price target for the stock by $50 to $1,250 and reaffirmed his ‘buy’ recommendation.

ABB Ltd. rose 1.75% as its earnings report for the first quarter, noted an orders bump of 21% and a 20% increase in net income in year over year figures.

The weakest component of the Bot Index was recorded by drone manufacturer AeroVironment. Having ridden the positive commendations of its effective Switchblade killer drone during the Ukraine/Russia conflict, the stock rose, this year, from $53.78 to $109. Investors enjoyed the ride but felt the surge was probably unsustainable and pulled the shares down to a more reasonable $86.78.

Other leading losers for the week included Oceaneering International, down 10.72% and Intuitive Surgical which fell 9.78%. 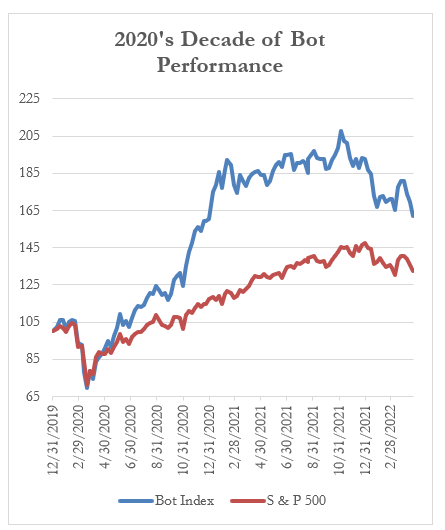