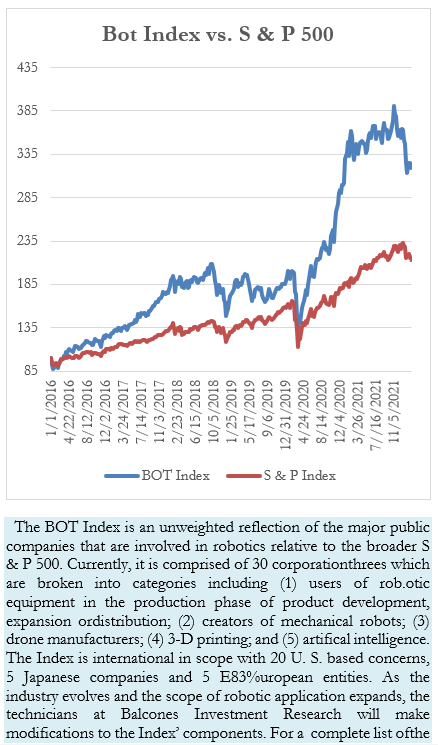 The Bot Index fell nearly 2% in trading last week, slightly below the S & P 500’s 1.58% decline. Even concerns over the Ukraine/Russia conflict did not favorably impact the four defense components of the Bot Index. Two Japanese stocks were among the major losers with Keyence Corp. falling 9.73% and Cyberdyne off 7%. Accuray Inc. declined 6.94%, giving up most of the 7.75% gain it posted the prior week. Volume on Accuray was about half the normal rate. iRobot was the biggest loser of the Index’s domestic components, falling 8.40%. Shareholders were disappointed with revenues in the fourth quarter that fell 16% and a decline in EPS of $1.17.

Cognex Corp. was the only real significant gainer for the week. The stock rose 3.61% after posting its first yearly revenue that exceeded $1 billion. That 28% increase allowed net income to rise 59% and earning per share to post a record $1.56, a 56% advance over the 1.00 EPS of 2021. 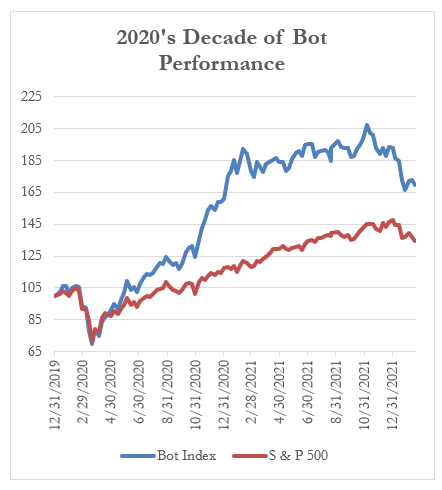 The February 12th issue of The Economist carried an article entitled “Automation Inc.” The publication featured several Japanese holdings within the Bot Index. According to the International Federation of Robotics, “The world’s stock of industrial robots has tripled in the past decade…with Japan furnishing 45% of new ones each year.” Due to demographic changes, the pool of labor in Japan has eroded and the Japanese have substituted significant robotic and automation efforts within the manufacturing sector. Of the four major automation companies – Fanuc, Keyence, Lasertec and SMC, their growth has been strong, and the article noted that their combined value is two and one half times of what it was five years ago. Even with the robust growth, operating profit margins in each firm exceed 20%, with Keyence at the 50% mark.

In another feature within The Economist’s Feb 12th edition, “The Bots Taking Over the Warehouse,” reviewed the tectonic shift in the use of mobile delivery robots within fulfilment centers. With heavy consumer demand, these distribution centers have replaced traditional employees with robots that provide safety, increased productivity and speed. Despite these human replacements, the article went to great lengths to note that employment in those facilities and newly designed ones have provided significant incremental jobs. Amazon has now employed some 350,000 warehouse bots whose capabilities have been continually enhanced to meet the needs of changing consumer shopping habits. The article quoted a McKinsey missive that stated, “Automation in warehousing is no longer just nice to have but an imperative for sustainable growth.”