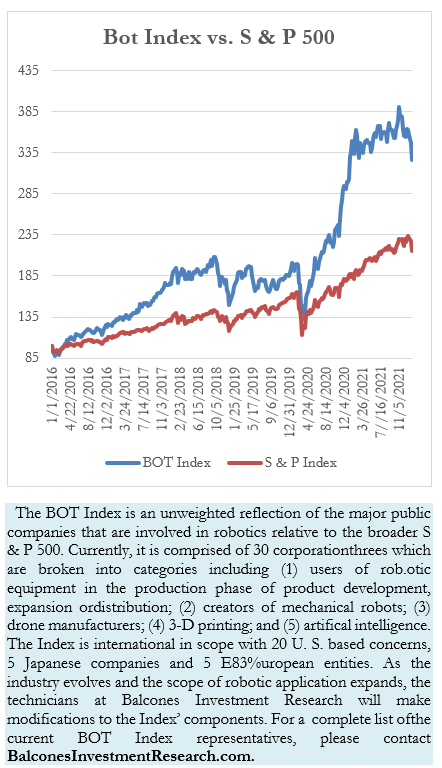 In some ways, this week’s performance of the Bot Index was the weakest since the Index’ inception. Of the thirty stock components there was not one that produced a positive return. That has never occurred in the six-year history of the production of the index. In the final analysis, the Bot Index declined 6.26% as the S & P 500 fell 5.68%.

The table below indicates the double-digit decliners within the index. Only two defense companies – Lockheed Martin and Northrup Grumman had ‘reasonable’ declines at .38% and 1.15% respectively.

The Bot Brief was granted an exclusive interview with Doctor George Kantor, Research Professor at Carnegie Mellon’s Robotic Institute last week. Carnegie Mellon was the first U.S. educational facility to establish a research and educational effort to focus solely on robotics. Founded in 1983, the Department has grown such that the organization has 1,000 applicants per year but due to the University’s limited enrollment, only 50 are eligible for entry into the platform. When asked about a ‘typical day’ in the life of a robot researcher, Dr. Kantor explained that he teaches a graduate level course, he is involved in robotic research (primarily in the agricultural area), part of his day is involved in fund raising and grant writing, mentoring high school students involved in the FIRST Program while applying his knowledge in a start-up named Bloomfield Robotics. His entrepreneurial effort is involved in vision robotics specifically applied to the agriculture arena.

When asked about the interest level of students, Dr. Kantor responded that the growth has been exponential, with particular focus on self-driving automobiles. However, as have many cautioned, the perception of autonomous vehicles is, like many robotic aspirations, likely to come later than most people imagine. As we noted in a former Bot Brief of its analysis of the agricultural and the two industrial revolutions,  the most impactful technological advances occurred in the latter stages of the cycle.

Regarding the current state of the economy and the woes created by supply chain disruptions, Dr. Kantor discussed the hours currently spent in re-configuring processes and designs in order to overcome the chip shortage. He noted that the availability of GPU’s in Artificial Intelligence applications has been particularly worrisome. He stressed that in some functions, designs need to be initiated by what contractors have in inventory rather than the traditional determination of the most efficient course of development.

Also, with regard to current economic conditions, Dr. Kantor noted that autonomous solutions are being sought to overcome the shortage of skilled labor. Particularly in delivery of products, food preparation and the lodging industry, conditions are ripe for expanded application of robotic solutions.

As for the future, in our discussion of energy and the rising interest in hydrogen powered fuel cells, Dr. Kantor noted that, much like other robotic issues we have discussed, they are a long way before widespread commercial resolution. For decades, fuel cells have been hailed has a panacea for energy needs. First invented in 1839, the initial commercial application occurred as a part of NASA’s Project Gemini in 1962. Instead, Dr. Kantor is excited in the vast breakthroughs in the weight and power of high density batteries. With transportation in mind, the strength and life of today’s and tomorrow’s batteries will allow for significant future robotic breakthroughs.