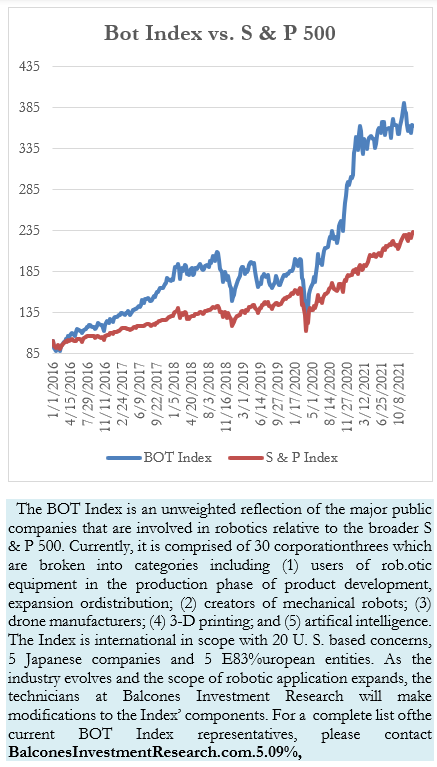 The first week of the new year turned out to be a real bust for the robotic stocks that comprise the Bot Index. Zapped by Fed comments regarding the cessation of the purchase of Treasury obligations and an end to easy money, the markets responded in a negative way. With a risk-on appraisal of the impact of rising rates, the higher beta NASDAQ companies were inordinately impacted by the Fed’s new policy. As such, the Bot Index dropped a dramatic 3.14% and the S & P 500 declined 1.87%.

While only Accuray Inc. fell by double digits, there were several Bot holdings that declined near the 10% level. Intuitive Surgical fell 9.78%, Azenta (the new name of Brooks Automation…sounds like it should be a pharmaceutical!) declined 9.235%, Faro Corp. slid 9.13% and Keyence Corp. removed 8.16% from its value.

Of the gainers, with the exception of Oceaneering International’s 13.53% increase, only the defense companies eked out positive returns for the week. OII’s jump was attributed to the increase in oil prices to above the WTI level of $80 and an announcement that the company had obtained $80 million in contracts during the 4th quarter. The defense companies: Raytheon Technologies, Northrup Grumman, and Lockheed Martin saw their stocks increase by 5.09%, 3.47% and 1.33% respectively. Washington’s saber rattling over the Ukraine was in part responsible for the increased investor interest. 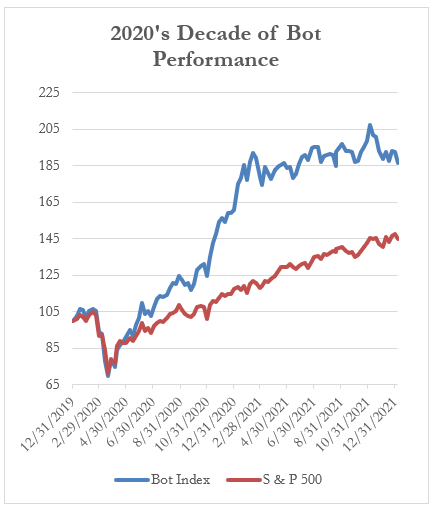 Following the lead of Tesla and Samsung, Facebook announced it too would invest in an Austin, Texas location. With Tesla moving its headquarters to the Texas capital and Samsung making the “largest foreign direct investment in the state” (at $17 billion), Austin is becoming a mecca for the high-tech industry in America. The Facebook (aka. Meta Platforms Inc.) commitment is taking the form of a lease of 589,000 square feet of office space in downtown Austin. The commitment tracks the employment gain from seven employees in 2010 to over 2,000 currently.

Speaking of employment in the heart of Texas, the IEEE Spectrum carried an analysis of tech financial incentives in its December edition. Not surprisingly, Austin ranked 2nd in annual pay increases in fourteen major tech centers. Despite the 5% growth in 2021, Austin’s average $144,000 salary is below the national average of $152,000 and well below the San Francisco Bay area’s $165,000. Is it any wonder why, with no income tax and a business-friendly state, the silicon valley is migrating East!