'There is no force on earth more powerful than an idea whose time has come."       Victor Hugo 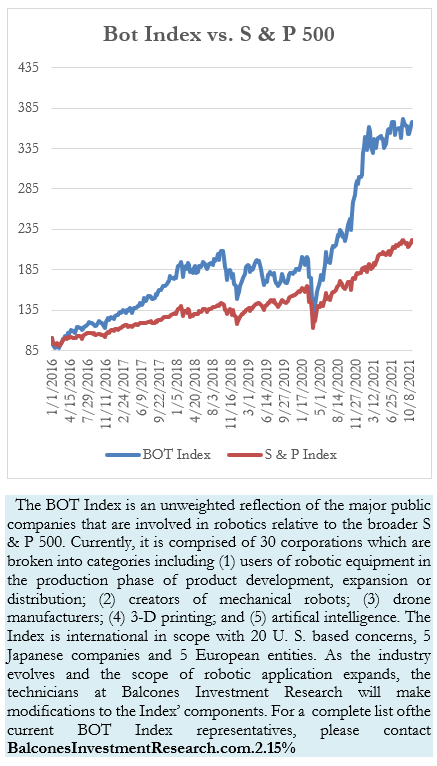 It was, again, the vacillation of the Asian companies that impacted the relative returns of the Bot Index. Unlike the prior week when the Japanese components of the bots helped the Index to exceed the performance of the broader market, this week the two worst performers in the thirty stock Index were Japanese stocks. While the Bot Index rose 1.42% for the week, the S & P 500 gained 1.64% due to sharp declines by Yaskawa Electric (-3.67%) and fellow Japanese company OMRON Corp. (-2.90%). Since achieving a multi-year high of $107.35 in early September, Yaskawa has been on a persistent decline that carried the stock to close the week at $86.68. Joining the weakness in the Asian names were two of the Index’s largest capitalized stocks. Both Amazon and Google declined by 2.15% for the week.

The gainers were led by Accuray Inc., the cyberknife company, who reported preliminary first quarter revenues of approximately $107.4 million, representing 26 percent year-over-year growth. Total year revenue guidance was upped to range between $420 million to $427 million. And adjusted EBITDA for the full year of fiscal 2022 to fall within $33 million to $35 million.

Tesla was the second leader with a near 8% jump above $900 for the first time. The stock was bolstered by an increase in the rating of its debt to BB+, which is just one step below ‘investment grade’.

According to Insider Monkey, Brooks Automation’s investors should pay attention to an increase in activity from the world's largest hedge funds in recent months. Brooks was in 32 hedge funds' portfolios at the end of the second quarter of 2021. The all-high for this statistic is 28. The stock rose 5% for the week. 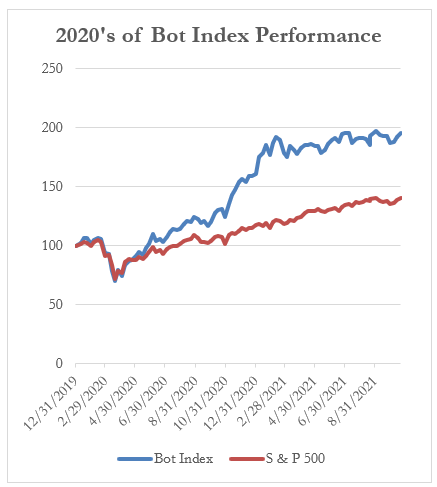 Just in the midst of a report regarding robocalls, the FCC announced it would be cracking down on scam and fraud texts and calls. In 2021 there has already been 10,000 complaints by the general public about identity theft, financial scams and unwanted solicitations.

In this backdrop, a Czech startup announced it had raised $16.6 million in venture capital to develop automation technologies that respond to vulnerabilities in financial services. Their product, Resistant AI, is designed to provide an extra level of checks and balances for financial apps and services. The AI powered cyberthreat platform leverages statistical modeling and machine learning to uncover fraud techniques. Their algorithms are designed to protect credit risk scoring models, payment systems, fraud, and customer onboarding systems. If successful, the venture may provide another answer to combat the ever-growing threat of cyberuncertainty.

The Chinese Market See the Potential of Blue Ocean Robotics

When Your Robot Has a Mind of its Own, Call JMP First