Odense, – Universal Robots A/S (UR), a Teradyne company and the global leader in the collaborative robot market, today named Jürgen von Hollen President effective immediately. He succeeds Enrico Krog Iversen who relinquished the post in June 2016 to pursue other interests. 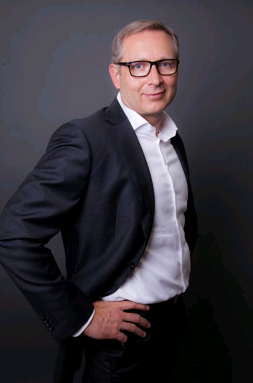 Mr. von Hollen was most recently the Executive President of the Engineering Solutions Division, which includes the Automation and Controls business of Bilfinger SE, in Mannheim, Germany, a leading international Engineering and Services company. In his role at Bilfinger, he was responsible for a global staff of nearly 10,000 and annual sales in excess of €1.0 billion. Mr. von Hollen began his career with Daimler-Benz aerospace and held senior management roles at Daimler-Chrysler Services, Deutsche Telecom and Pentair.

“We’re delighted to have Jürgen leading Universal Robots through this period of explosive growth,” said Teradyne CEO Mark Jagiela. “Jürgen’s experience developing and leading global teams serving a broad range of industrial and commercial customers is tremendously important as we drive the adoption of easy to use, safe, and economical Cobots across the globe.”

“I am excited to join Universal Robots as they work to fundamentally reshape automation across the global economy,” said Mr. von Hollen. “The opportunity to lead and expand a high powered organization like UR with such a long term, high growth outlook is very rare and I look forward to working with our worldwide distributors, partners, and customers in the days ahead to realize the full potential of collaborative robots.”

Mr. von Hollen is based in Odense, Denmark.

About Teradyne
Teradyne (NYSE:TER) is a leading supplier of automation equipment for test and industrial applications. Teradyne Automatic Test Equipment (ATE) is used to test semiconductors, wireless products, data storage and complex electronic systems, which serve consumer, communications, industrial and government customers. Our Industrial Automation products include Collaborative Robots used by global manufacturing and light industrial customers to improve quality and increase manufacturing efficiency. In 2015, Teradyne had revenue of $1.64 billion and currently employs approximately 4,200 people worldwide. For more information, visit www.teradyne.com. Teradyne(R) is a registered trademark of Teradyne, Inc. in the U.S. and other countries.

About Universal Robots
Universal Robots is the result of many years of intensive research at Denmark's successful robot cluster, which is located in Odense, Denmark. The company was co-founded in 2005 by the company’s CTO, Esben Østergaard, who wanted to make robot technology accessible to all by developing small, user-friendly, reasonably priced, flexible industrial robots that are safe to work with and on their own can be used to  streamline processes in the industry.

The product portfolio includes the collaborative UR3, UR5 and UR10 robotic arms named after their payload in kilos. Since the first UR robot launched in December 2008, the company has experienced considerable growth with the user-friendly robots now sold in more than 50 countries worldwide. At just 195 days, the average payback period for UR robots is the fastest in the industry.

The company, a part of Boston-based Teradyne Inc., is headquartered in Odense and has subsidiaries and regional offices in the U.S., Spain, Germany, Singapore, Czech Republic, India, and China. Universal Robots has more than 300 employees worldwide. Learn more at: www.universal-robots.com

Identify Potential Processes for Automation - Step 2 of the Practical Guide

OCTOPUZ Foam Drilling and Gluing Simulation with a Universal Robot