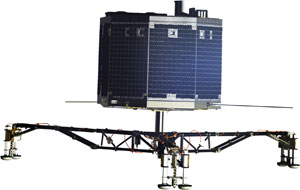 Today, the European Space Agency (ESA) successfully landed a small laboratory on Comet 67P/Churyumov-Gerasimenko. The lander features ten instruments which may provide important clues to the origin of life. Two DC motors made by drive specialist maxon motor are on board the mission.

For the first time in the history of space exploration, scientists have access to substantial data from a comet's surface. The European space probe Rosetta successfully guided its lander Philae to touch down on the four-kilometer Comet 67P/Churyumov-Gerasimenko, a.k.a. Chury. The Philae lander has a mass of 100 kg and features ten instruments.

maxon motor is proud to be part of this mission. The Swiss-based drive specialist provided two DC motors, with a diameter of 13 mm each. These motors will be used to lower the APXS instrument to the ground. The APXS is an alpha x-ray spectrometer, developed by the Johannes Gutenberg University Mainz to be used to record the chemical composition of Chury and provide information on the presence of key elements such as carbon and oxygen.

Traveling through space for more than ten years!
Never before has a DC motor been exposed to vacuum for this long. However, the motors have now passed an initial motion test, which is a promising sign. The individual instruments on the lander will start being automatically activated in sequential order. Within a day or two, the micromotors will lower the APXS from the lander's belly to the surface of the comet.

The Rosetta project is expected to continue until the end of 2015, when Chury returns to the outer reaches of our solar system. Until then, researchers want to collect as much data as possible from the comet's core and tail – and maybe answer the question of whether comets once brought water or even life to Earth.

Maxon is Flying to the Sun