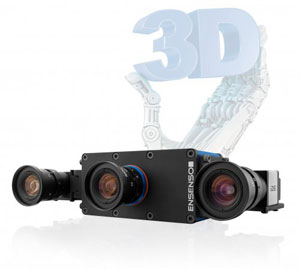 Image quality is playing an increasingly important role in 3D vision applications. Manufacturers are taking this into account and offer even better industrial cameras. More powerful sensors, however, usually also mean larger amounts of data and therefore potentially longer processing times. With the new EnsensoSDK 2.2 release, IDS offers a solution that guarantees very fast processes and high clock rates. Stereo matching can now be supported by the Nvidia CUDA graphics card, which speeds up the process by about five times. This feature and other functions of the software development kit can be used with all cameras of the Ensenso series.3D vision: EnsensoSDK speeds up processes through GPU-based image processing

The modular Ensenso stereo cameras enable 3D vision and robot vision applications that are not only convincing in terms of precision, but also in terms of economy and speed. In addition to the modular system with two cameras, each with a CMOS sensor, and a projector for the exact detection of objects via a 3D point cloud, the manufacturer also offers a powerful software development kit (SDK).

Up until now, for example, 3D data could only be processed using a CPU. With the updated software development kit, however, stereo matching can now be GPU-based as well. This feature can specifically be used with Nvidia GPUs. Depending on the parameterization of the system, the additional computing capacity of the GPU accelerates the processing by about five times.

IDS also introduces a GUI tool (»NxProfiler») which enables developers to evaluate and optimize processes. In addition, so-called virtual »Ensenso FileCameras» can be created from saved original data which users then can use to process data offline. The new EnsensoSDK 2.2 is now available for download.