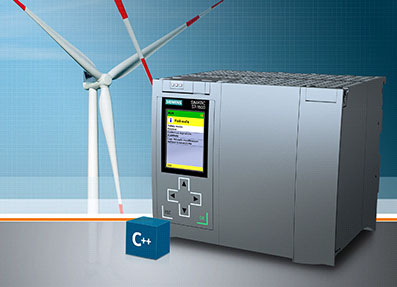 Nuremberg - Today, programs written in high-level languages, such as C/CC+, are used with Simatic controllers. Siemens has developed the new CPU 1518 ODK advanced controller and the Simatic ODK 1500S engineering package for this purpose.

The user generates his high-level language program with the Open Development Kit, and integrates it into the Step 7 program of the new controller, which is based on the currently most powerful CPU in the latest range of Simatic S7-1500 controllers. The new range allows existing technological know-how, such as algorithms written in C/C++, to be combined with the high-end controller technology from Siemens. The Simatic ODK 1500S engineering package helps the user to develop C/C++ applications. The package also includes the Eclipse open program development environment for creating real-time applications, such as control functions and complex mathematical algorithms. The Step 7 blocks for Simatic controllers are generated automatically, which significantly simplifies the configuration of the controller. The high-level language programs are then called from the control program of the CPU. Ready-made function libraries are already available for applications such as wind power generation.

The Simatic Step 7 Target 1500S engineering package and the CPU 1518 ODK give users, for the first time, the capability of integrating complex Simulink models into the control program of a Simatic S7-1500 controller. This takes advantage of the benefits of model-based development with Simulink directly on an S7-1500 controller.

About Siemens AG
Siemens AG (Berlin and Munich) is a global technology powerhouse that has stood for engineering excellence, innovation, quality, reliability and internationality for more than 165 years. The company is active in more than 200 countries, focusing on the areas of electrification, automation and digitalization. One of the world's largest producers of energy-efficient, resource-saving technologies, Siemens is No. 1 in offshore wind turbine construction, a leading supplier of gas and steam turbines for power generation, a major provider of power transmission solutions and a pioneer in infrastructure solutions as well as automation, drive and software solutions for industry. The company is also a leading provider of medical imaging equipment – such as computed tomography and magnetic resonance imaging systems – and a leader in laboratory diagnostics as well as clinical IT. In fiscal 2015, which ended on September 30, 2015, Siemens generated revenue of €75.6 billion and net income of €7.4 billion. At the end of September 2015, the company had around 348,000 employees worldwide.

Drives from ebm-papst for New Servo Controller Family from Siemens