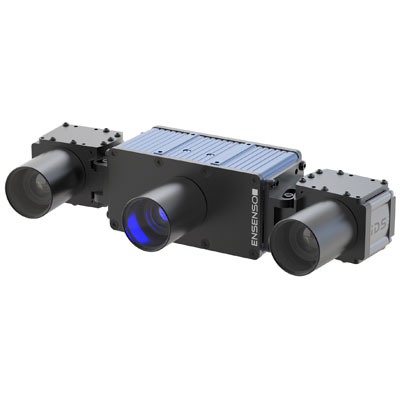 With the X30 FA and X36 FA, the industrial camera manufacturer IDS is launching two more models from its 3D camera system Ensenso X. Both new models are specifically designed for use in harsh ambient conditions. All components fulfill the requirements of the IP65/67 protection class and are therefore effectively protected against dirt, dust, water splashes, or cleaning agents. The 3D camera system combines a powerful projection module with a Gigabit Ethernet switch and two GigE uEye FA cameras with a 1.3 megapixel CMOS sensor that can be mounted at different distances. In addition to the baseline, the vergence angle and focal distance can also be freely selected, thus allowing the solution to be individually tailored to any 3D-vision requirement.

The Ensenso X series is a very flexible camera system that enables 3D capturing of objects with a volume of up to several cubic meters, such as heavily laden pallets. With working distances of 0.5 to 5 meters, the range of applications includes anything from bin picking through to warehouse and logistics automation. The system comprises a 100 watt projector unit on which two GigE cameras can be mounted at different distances. The camera mounting brackets are available in various widths to allow different baseline lengths to be implemented. Also, the angle of view of both cameras can be configured, and different C-mount lenses can be selected for the camera and projector. For the new IP65/67 models X30 FA and X36 FA, lens barrels provide protection not only against dust, dirt, or water splashes, but also against accidental adjustment of the lenses.

The Ensenso X36 FA model also features the innovative FlexView2 projector, which ensures even better spatial resolution, as well as a system that is extremely robust when it comes to dark, shiny, or reflective surfaces.

As with other models, the supplied Software Development Kit allows the two 3D camera systems from the Ensenso X series to be easily configured and operated in the familiar way. New features include a setup wizard for focusing and calibrating the 3D stereo cameras.

Automated picking of boards and placing them into cardboard boxes