Montreal, CANADA – Robotmaster (Jabez Technologies), a leader in offline programming software for robotics, today announced that it is now supporting Nachi-Fujikoshi Corporation’s NACHI robots.   Robotmaster is thankful to its Japanese Distributor, Genetec, who helped in carrying out testing with Nachi in Japan.  The two companies have come together to leverage on their technological excellence and innovative strength to accurately respond to market demands. 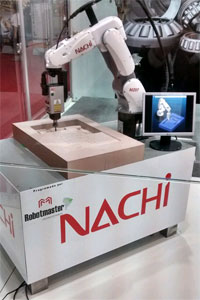 Nachi is one of the major robot manufacturers in Japan and supporting them will allow Robotmaster to continue contributing to better productivity for programming welding as well as a variety of robotic applications. One of the core capabilities of Robotmaster is that it makes it easy to detect and modify any collisions, joint limits and other common errors. By including Nachi to its portfolio, Robotmaster is now supporting most robot manufacturers.

With this new partnership with Genetec, Robotmaster will be able to strengthen its presence in the Japanese market. ”Genetec is a competent and reliable partner, with a proven track record for helping manufacturers with CNC and robot programming solutions”, states Chahe Bakmazjian, President of Jabez Technologies. He goes on to state, “This partnership will enable us to further develop Robotmaster through customers of Nachi robots.”

Both parties have joined forces to enable the adoption of robots by manufacturers seeking to produce higher quality products at a lower cost. As a result, manufacturers can easily and efficiently program robots to maximize return on investment.

“As the market demand for offline robot programming rises in Japan, we are extremely pleased that Robotmaster is now supporting Nachi robots” states Hirofumi Nonaka, Executive Director of Genetec Corporation (Japan).  "We are thankful for this collaboration to work with Robotmaster and deliver an unprecedented user experience while liaising with Japanese robot manufacturers”.

Robotmaster continues to enhance the robot programming experience with its intuitive and dynamic user-experience. Customers seeking to generate more profit for their robot with a simplified and interactive software are encouraged to contact Robotmaster to further discuss their needs.

Optimizing Robot Cycle Time: When Every Fraction of a Second Costs

Neovo Robotics Now an Official Reseller of OCTOPUZ in Finland