Robotiq’s mission is to free human hands from repetitive tasks. Manufacturers struggle to put robots to work in their factory because it’s still too costly and too complicated. Our tools and know-how simplify collaborative robot applications, so factories can start production faster. Robotiq works with a global network of connected robot experts supporting their local manufacturers. 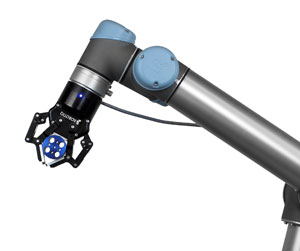 Quebec, Canada – Robotiq releases a new version of its 2-Finger 85 Adaptive Gripper. Nearly two times stronger and 50% faster this new Gripper has been perfectly designed to match Universal Robots in terms of payload, flexibility and user-friendliness.

Compatible with all major industrial robots having a payload of between 5 to 10 kg, the 2-Finger 85 Adaptive Gripper provides greater flexibility to robots by handling a wide variety of part shapes with its different gripping modes. With control over finger force the user has the freedom to pick up fragile or brittle items, as well as tough parts.

PERFECT DESIGN AND INTEGRATION FOR UNIVERSAL ROBOTS
The 2-Finger 85 Adaptive Gripper has been designed for applications requiring flexibility and quick set up times. It has also been designed to make installation and programming on Universal Robots easy and accessible to everyone.

Installation Made Easier
From cabling, to mechanical coupling and software drivers, Robotiq provides everything you need for a quick installation. On the software side, Robotiq drivers for Universal Robots have been developed to install automatically, simply by plugging your USB drive into the Universal Robots' teach pendant. On the hardware side, the 2-Finger 85 connects directly to the USB port of the robot controller. An external controller is no longer required.

Programming Made Easier
Included in the bundle are a series of Robotiq Gripper templates for Universal Robots. From now on the user only needs to import the desired gripper programming templates, then add them to the robot orders to set up the robotic application.

“We have redesigned the 2-Finger Adaptive Gripper to let people take full advantage of robotics. With this new product and its featured bundle for Universal Robots, we want to make robotics accessible to everyone by being more intuitive and user-friendly”, says Samuel Bouchard, President of Robotiq.

By introducing this product, Robotiq offers to every company, from SMEs to large manufacturers, the possibility of having a flexible and user-friendly Robotiq Gripper for their collaborative robots.

10 Robot Components That Can Improve Your Setup