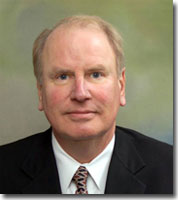 Litt founded Genesis Systems Group in 1983 after a decade of building the small Rock Island firm of
R & R Welding Supply through a variety of robotic-related inventions applicable to the welding industry. Litt’s term as RIA president is historically significant, being the first time that a member representing the System Integrator segment assumes the association’s presidency. He succeeds Trevor Jones, Senior General Manager, Yaskawa Motoman Canada, Ltd. (Mississauga, ON, Canada), who served terms as RIA President in 2006 and 2007. Jones will continue to serve on the RIA Board as Past President.

Regarding the association, Litt says, “RIA is a strong organization. What we do is important. We have a solid financial footing, talented staff, an outstanding Board of Directors, a vibrant industry and a great future. I am honored to have the opportunity to lead.” On the status of the robotics industry and RIA, Litt states, “Our industry has changed, our association has matured and the constituencies we serve have become more diverse.”

Litt has been on the RIA Board of Directors since 2000, and was most recently the RIA First Vice President. Additionally, as a leading spokesman for robotic welding automation, Litt is active as a member of the Association for Manufacturing Technology and has served twice as chapter chairman of the American Welding Society. He currently holds three patents related to robotic apparatus.

Regarding his term as RIA President, Litt comments, “I plan to shepherd our association in providing expanded membership benefits to the rapidly growing and largely untapped System Integrator membership subgroup. I hope to have the opportunity to participate in the continuation and expansion of current RIA programs and, at the same time, inspire a look toward new programming that will further advance the value we bring to our membership and our industry.”

Previewing another area that he hopes to concentrate on during his term, Litt believes that, “It may be the right time to shift some of our planning a bit more toward the horizon or perhaps, over the horizon. We will focus on determining the most important one or two strategic initiatives to pursue in the near term while laying out successive initiatives that we may pursue over time.”

Founded in 1974, RIA represents some 270 North American companies including leading robot manufacturers, component suppliers, system integrators, end users, research groups, and consulting firms. The association sponsors the biennial International Robots & Vision Show and Conference plus many regional events, and is secretariat of the ANSI/RIA R15.06-1999 Robot Safety Standard. RIA also serves as North America’s representative to the International Federation of Robotics and is the only source of North American robot sales statistics.

For more information about RIA and the robotics industry, visit www.roboticsonline.com or contact RIA Headquarters at 734-994-6088.

The full roster of RIA Board of Directors for 2008 follows: