Ann Arbor, MI, November 9, 2015 – The Robotic Industries Association (RIA) today announced the launch of a website paying tribute to Joseph F. Engelberger, known as the “Father of Robotics.” Engelberger, who recently celebrated his 90th birthday, was an engineer and entrepreneur who pioneered the robotics field. Engelberger founded the world’s first robotics company, Unimation, in 1956. 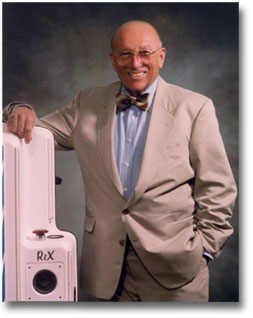 “It’s important to remember our history in robotics,” said Jeff Burnstein, President of RIA. “This website provides a timeline of his many accomplishments in the field of robotics that is still revolutionizing modern manufacturing processes today.” The tribute site is located on the RIA website, www.robotics.org.

RIA also announced that nominations are now being accepted for the world's most prestigious honor in the field of robotics, the Joseph F. Engelberger robotics awards. The awards are presented each year to individuals for excellence in robotics technology development, application, education, and leadership. Since the awards inception in 1977, they have been presented to 116 robotics leaders from 17 different nations. Recent winners of the Engelberger award include Dean Kamen, founder of the FIRST Robotics competition and Rodney Brooks, co-founder of iRobot and current Chairman and CTO of Rethink Robotics.

The 2016 awards will be presented in the categories of Leadership and Application.  Each winner receives a $5,000 honorarium and a commemorative medallion with the inscription "Contributing to the advancement of the science of robotics in the service of mankind." These distinguished awards will be presented in conjunction with the International Symposium on Robotics in Munich, Germany, June 21-24, 2016. The nomination form is available on the RIA website. Applications must be received by January 15, 2016.

About Robotic Industries Association (RIA)
Founded in 1974, RIA is a not-for-profit trade association dedicated to improving the regional, national and global competitiveness of the North American manufacturing and service sectors through promotion and enhancement of robotics and related automation. RIA represents 365 robot manufacturers, system integrators, component suppliers, end users, consulting firms, research groups, and educational institutions. The association hosts a number of events including the National Robot Safety Conference, the International Collaborative Robots Workshop (in conjunction with The Vision Show, May 3-5, 2016 in Boston, MA), the A3 Business Forum (February 3-5, 2016 in Orlando, FL) and the biennial Automate Show & Conference (April 3-6, 2017 in Chicago). RIA also provides quarterly robotics statistics and has a content-rich website, Robotics Online. For more details on RIA, visit www.robotics.org or call 734/994-6088.

Why AI Won’t Overtake the World, but Is Worth Watching