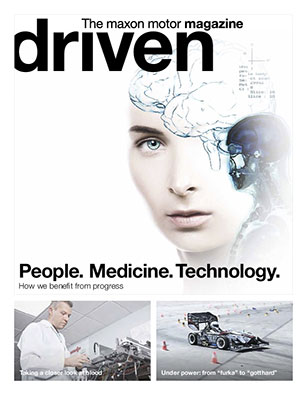 The new issue of driven, the maxon motor magazine, is out!

In medical technology, there are thousands of patent applications every year. New robots, measuring devices, and other tools minimize the risks of surgery. Some of the latest technologies are presented in driven, the maxon motor magazine.

The pace of development in medical technology is breathtaking. Machines and tools are becoming smaller, more efficient, and more precise. These days, surgeons are performing minimal-invasive operations using robots that hardly leave a scar. Types of eye surgery that used to be extremely risky could soon be routine. It looks like it's only a matter of time until surgical tools will be able to reach specific places in the brain while avoiding sensitive areas.

driven is taking a closer look at some of these new technologies. We also investigate methods to control the heat build-up on hand-held devices, and we present the fastest electric car in the world.

driven is released twice a year as a printed magazine in German, English, and Chinese. The magazine may be ordered free of charge.

Should I Add Robots to My Facility?