Oakland University is a nationally recognized university offering students a personal, high-quality education through flexible class schedules, new facilities, student services, classroom technologies, labs, internships, co-ops, research opportunities with corporate partners, and degree and certificate programs. Oakland University's School of Engineering and Computer Science (SECS) offers instruction leading to degrees at the bachelor's, master's and doctoral levels and has about 1,500 undergraduate and graduate students. The Department of Electrical and Computer Engineering (ECE) has been at the forefront of all engineering disciplines in technological innovation. The Center for Robotics and Advanced Automation (CRAA) at ECE has been at the forefront of research and development in the areas of controls, robotics, automation and machine vision. The Chrysler Controls and Robotics Laboratory at ECE serves as an active research center in various areas of controls and robotics. 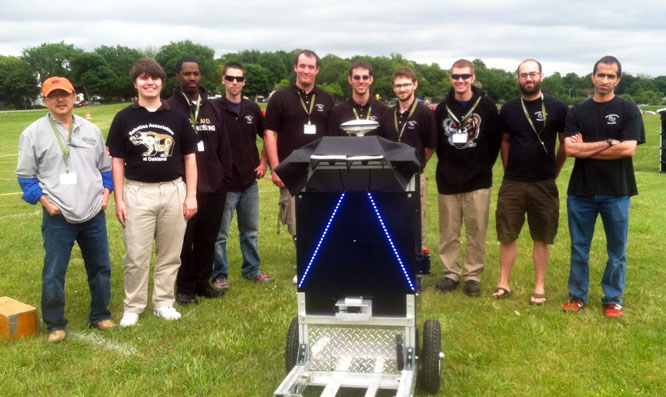 For the first time in university history, the Oakland Robotics Association (ORA) took the top prize at the 21st annual Intelligent Ground Vehicle Competition (IGVC). The team placed first overall this week, placing above 53 collegiate teams from across the globe, and brought the coveted Lescoe Cup home to Oakland University.

Additionally, ORA placed second in the Design Competition and the Joint Architecture for Unmanned Systems (JAUS) Challenge, and third in the Autonomous Navigation Challenge.

IGVC challenges teams to build and operate autonomous robotic vehicles on an outdoor course with defined lanes, GPS waypoints and obstacles. The four-day competition is held annually on Oakland’s campus.

“At the School of Engineering and Computer Science, we are very proud and excited for our students and their adviser for winning first place at the 21st Annual Intelligent Ground Vehicle Competition,” said Louay Chamra, dean of the SECS. “This accomplishment reflects commitment and hard work on the part of our robotics team, and we celebrate this milestone with them and applaud them on their triumph.”

KaC Cheok, engineering professor and ORA adviser, was proud of his team’s accomplishments.

“The OU robotics team is a multi-disciplinary group of engineering students whose talents peak simultaneously in the fields of mechanical, electrical, computer, mechatronics, and systems control engineering,” he said. “They are motivated, confident, knowledgeable, critical, creative, tireless and ambitious. And they get it done!’”

“My favorite part of this year’s IGVC was seeing our robot do exactly what we wanted it to do,” Radovnikovich said. “This is the most maneuverable robot that ORA has ever had at IGVC.”

Jerry Lane, co-founder, co-chair and chief judge of IGVC, said participating students are given a professional edge in the industry.

“We’re finding that our graduates are starting companies, going into defense and going into the automotive industry,” said Lane, who is retired from TACOM/TARDEC. “IGVC takes students and turns them into scientists and engineers who can be put to work right away, without unnecessary training. They have acquired the relevant experience, design skills and architectural skills from our competitions.”

Technologies utilized in the process are widely applicable and are quickly being commercialized in the development of vehicles that drive and park autonomously, brake automatically and execute lane detection.

“The automotive industry is moving in a huge concerted and competitive direction in active driver’s assistance systems where cars and trucks help to mitigate accidents,” explained Dr. Cheok, who is also a co-chair and co-founder of IGVC. “We are already seeing the robotics technologies incorporated in automobiles today with collision warning and avoidance systems, automatic parking, and more. Continental, Magna, Valeo and Takata, are all sponsors of the IGVC.”

“I’ve always had a passion for hands-on, imagination-driven design and enjoy engaging in the opportunity to build that design,” he said.

“When I began taking classes at OU, I was always looking for a chance to apply those skills, outside of the theory-based courses. Taking classes like Design and Analysis of Electromechanical Systems and Microcomputer-based Control Systems give me a chance to expand on the skills I had been developing and furthered my desire to join the IGVC team.”