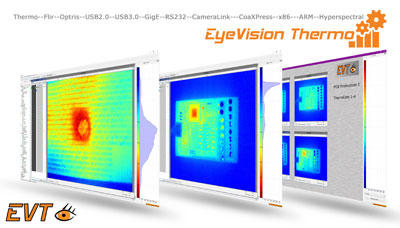 For the active IR measurements the material, to be examined has to be heated. Materials are for example illuminated with Near IR (NIR) Light (695 – 1000 nm) and then the reflections from that illumination is captured using a camera sensitive to that part of the spectrum. Whereas one speaks of a passive thermal imaging, when the sensor simply detects IR radiation emitted as heat, in order to detect the flaws in the material. The heat can vary anywhere from 900 – 14,000 nm.
Both methods will be explained by means of examples.

Application areas for the nondestructive thermal imaging analysis are especially the automotive or the aircraft industries. As already mentioned the EyeVision Thermo commands are applicable for active as well as passive IR. One application for the use of EyeVision Thermo in case of active IR is for example the inspection of gas turbine blades. Gas turbines are exposed to enormous temperatures and centrifugal forces and therefore the demands on the quality of each single component is correspondingly high. The inspection tasks involve the complete manufacturing chain from the cast of the blades to finishing to applying the thermal barrier layer.

Furthermore, to inspect the passive and active condition of assembly groups or elements the commands of the EyeVision Thermo software are also benefiting. As well as for the nondestructive thermal flow inspection for the manufacturing-integratet quality control in the automotive industry.

Also hyperspectral analysis is now possible with EyeVision. The new tools of the EyeVision software can be applied for the selective evaluation of different wavelengths.

All in focus – EyeVision Supports The Imaging Source Autofocus Cameras

Is Embedded Vision the future of image processing?