NEUGART USA is the US subsidiary of the German company Neugart, a leading supplier of precision gearheads for automation, motion-control, and robotic applications. NEUGART is a family owned company dedicated to product excellence and total customer satisfaction. Founded in 1928, machining precision gears for instruments, in the 60’s NEUGART developed its first precision planetary gearbox product line for stepper motors, used predominantly in automated systems that time. With our attention to details, ongoing product enhancements we remain the leading force in this technology. The 4th generation of our precision, high value economy E- series product line offers the highest torque density in the industry. Neugart gearboxes enjoy the highest quality- and reliability reputation worldwide. Our products are assembled from “Made in Germany” components, in assembly facilities in Europe, USA and Asia. In North America, we assemble and support our customers from Charlotte, NC. 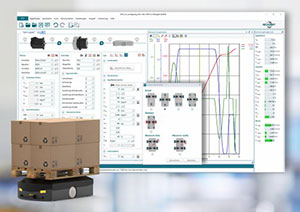 Update for the Neugart configuration tool

The direct route to the most cost-efficient and energy-efficient gearbox/motor combination - with the highly approved Neugart Calculation Program (NCP). The user-friendly configuration tool is now available in the new software version NCP 4.2. Customers of the gearbox specialist can download the free version now.

Complex load trends in the drivetrain can be calculated in the NCP, and the optimum application-specific motor/gearbox combination determined on this basis. With the update, it is now also possible for propulsion drives in Automated Guided Vehicles (AGVs) and the new NGV gearbox range that is tailored to these vehicles. Existing projects from current or older NCP versions can now also be loaded for newly designed controlled systems and compared with them.

As well as these new functions, Neugart has simplified the operation of the tool with version 4.2 and improved user friendliness: conversions are no longer required when importing read-out motor data, for example. Users of popular CAD programs can now also use the familiar full stop as a separator as well as the comma. Calculations can also be carried out in the input fields. And the gearbox documentation has also been optimized, meaning that the user detects whether the selected gearbox is actually suitable on the basis of utilization bars.

And last but not least, NCP 4.2 has an example for every application, which makes it easy to learn how to use the tool.

Neugart is the family business among gearbox manufacturers. Established in 1928, the company has always been run by its owners, who are now in their fourth generation. Neugart develops, manufactures and markets planetary gearboxes and customised gearboxes to customer specifications. The company employs approximately 700 people worldwide, including around 600 at its historic headquarters in Kippenheim in southern Baden.

Automation Fair in Vancouver, BC on November 6, 2019