New Production Facility for Detectors in the USA 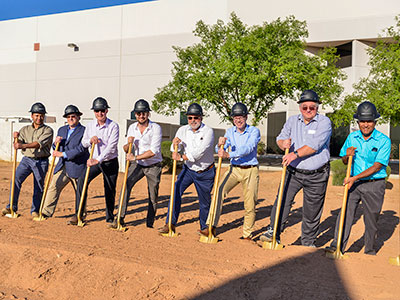 LASER COMPONENTS Lays the Foundations for the Future

Bedford, NH - With the building of its new production facility for detectors, LASER COMPONENTS, specialized provider of components and services in the laser and optoelectronics industry, has begun laying the foundation for the future. At the end of April, the ceremonial setting of the cornerstone for the new 26,000 ft² building took place in Chandler, Arizona. Work on the building, which will serve as a central development and production site for all LASER COMPONENTS detector technologies, should be completed by the spring of 2020. The facility, which will be equipped with production areas and cleanrooms according to the latest standards, is designed for up to 70 employees and thus offers sufficient space for the growth that the CEO Patrick Paul expects to see in the coming years.

“We deliberately chose the location for our new plant near our previous headquarters. This will allow us to continue to benefit from the expertise of our long-standing employees and to expand our close ties with Arizona State University,” says Patrick Paul. “In addition, major players in technologies related to autonomous driving have recently settled in Chandler. This market is becoming increasingly important for our optical detectors.”

LASER COMPONENTS manufactures detectors for vastly different technologies in the USA. These include silicon and InGaAs avalanche photodiodes, which collect the smallest amounts of light. Further components include PbS/PbSe, InAs, InGaAs, and pyroelectric detectors, which are mainly used for gas measurement and flame detection.

“Manufacturers of sophisticated security systems have relied on our detectors for many years now,” explains Dragan Grubisic, general manager of the LASER COMPONENTS Detector Group. “The automotive industry is known for its high standards of quality, which is why we are confident that our high-end products make us an attractive partner. With the new facility, we will be able to manufacture the quantities necessary to meet the enormous growth potential of this market.”

The best example of the implementation of the Group's ambitious plans is the production facility in Canada, which successfully qualified pulsed laser diodes for use in the automotive industry after its expansion two years ago.

About LASER COMPONENTS
LASER COMPONENTS specializes in the development, manufacture, and sale of components and services in the laser and optoelectronics industry. At LASER COMPONENTS, we have been serving customers since 1982 with sales branches in five different countries. We have been producing in house since 1986 with production facilities in Germany, Canada, and the United States. In-house production makes up approximately half of our sales revenue. A family-run business, we have more than 220 employees worldwide.